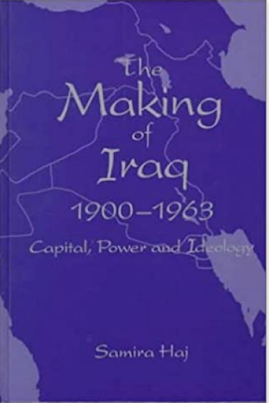 The Making of Iraq 1900-1963, Capital, Power and Ideology is a detailed academic book on how the development of Iraq’s economy under the Ottomans and then the British created a political system that would eventually bring down both the monarchy and General Abd al-Karim Qasim’s government. The author Samira Haj argues that the agriculture system dominated by large estates distorted the economy and limited the government which created conditions for a coup in 1958 led by General Qasim. The forces that backed him would eventually split over ideology and class and led to his demise as well. Haj emphasizes that internal dynamics rather than foreign influence or international capitalism led to these changes

The first part of the book focuses upon how large landowners came to control Iraq’s economy and government. As the Ottoman system began breaking down and the world economy entered the empire tribes moved towards agriculture while the leading sheikhs started seizing property and became the landed elite. The Ottoman administration later co-opted the sheikhs and they gained official positions, which they used to increase their power and holdings. When the British created Iraq in 1920 they turned to the tribes and sheikhs to help rule the country and set up a parliamentary system where candidates were mostly tribal leaders and the elections were fixed. Both the British and Iraqi administrations empowered the landed elite and solidified their hold upon the economy. For instance, in 1952 the Development Board was put in charge of 70% of the country’s oil revenues. Most of that money went to agricultural projects like land reclamation which opened up new areas for the sheikhs to seize. Not only that but the estates were highly inefficient depending upon sharecroppers and expansion rather than new techniques of harvesting, mechanization, etc. to boost production. They retarded the rest of the economy as well because most of the population worked in agriculture and were poor creating a very small consumer market for manufacturing and merchants. This was the first part of Haj’s argument. Most people focus upon oil as the dominant sector of the Iraqi economy. However for the first twenty years of its existence it had little impact. For instance it employed few and when the government started reaping benefits from the industry it put most of it into farming. Just as important the landed elite became the base of the British Mandate and then the Iraqi monarchy. It shaped many of the laws and its estates blocked the development of the economy. This also shows how the author mostly focused upon the domestic economy and politics to explain events rather than looking at foreign sources.

The next section of the book is about how the agricultural system led to the overthrow of the monarchy. The estates caused resentment amongst the business class because they couldn’t grow with the dominance of farming and thousands of peasants fled the countryside for the cities to try to escape poverty. Baghdad made the situation worse by consistently turning to repression after World War II to deal with its opponents, which caused more resistance. The growth of oil funds in the 1950s made the government less dependent upon the domestic economy and less respondent to public demands as a result. That isolated it and made it more vulnerable. Eventually three main groups, the nationalists, the Communists and the Baathists emerged calling for a more democratic Iraq, land reform to curtail the power of the sheikhs and ending British neocolonialism. By 1956 they were joined by the Free Officers who eventually led the 1958 coup. Many historians claim this was the result of a conflict between the traditional elite and modernization. Haj believes the political and class differences were the main motivations. The officer corps, the Baathists and the nationalists for example were made up of the urban middle class whose families worked in and owned the consumer and manufacturing businesses that were constrained by agriculture. They along with the Communists all believed that the political system was subservient to British imperialism. The increasing use of force by the authorities made the moderates and liberals give up on the idea that reform could work and only the ending of the system would lead to the change they wanted. Again, the author presents a convincing argument that the agriculture system, repression, a government removed from the people and British influence made the 1958 coup inevitable. More and more forces were alienated from the government and its small base in the oligarchy meant it wouldn’t last.

The Making of Iraq finishes by laying out how the parties behind General Qasim’s government split leading to his downfall. This was due to two causes. First the Baathists and Nasserites wanted Iraq to join with the United Arab Republic of Egypt and Syria. The nationalists and Communists believed in an independent Iraqi state and therefore didn’t support pan-Arabism. The nationalists were also afraid a union would destroy the business interests they represented due to new competition. They united together to purge the Arab nationalists from the government and civil organizations like unions, while using their cadres to engage in violence to control the streets. The author writes that the second issue was the agrarian reform law but then she doesn’t prove it. Instead the book points out the real reason was the Communists demanding positions in the government. Having expelled the Baathists the nationalists didn’t want to share power. Like the monarchy they ended up using a crackdown to quell the Communists including limiting freedom of speech, outlawing groups the Communists controlled, not allowing them to become a legal political party, arresting hundreds of party members and attacking their offices. Because of Soviet doctrine that the party was to support national unity governments the Communists backed down from their demands. The final straw was the nationalists split into factions leaving only General Qasim in the government. He had no base left and it was only a matter of time before the pan-Arabists got their revenge and overthrew him in 1963. This all fits into Haj’s overall theme that Iraq gave rise to a diverse and divided group of political forces and classes. They were able to overcome their differences and unite behind getting rid of the monarchy and the British, but once in power it was only natural for them to diverge once again over their different agendas. It’s odd though that she focuses upon agrarian reform as a major factor when her argument doesn’t work. It’s the only real fault in the book.

Samira Haj presents a very interesting book on Iraqi history. She covers a large swath of time from the end of the Ottoman era to the fall of the Qasim government. She lays out the economic forces at work, namely the development of large estates owned by sheikhs which proved inefficient, dominated the economy and government, and limited the development of the country overall. There’s the class differences with the bourgeoisie wanting to end the power of the landed elite so they could expand their businesses and rule. Finally, the political factors that brought the opposition together in the 1958 coup which then split and led to the downfall of General Qasim. Her research is extensive going into great depth into every topic she touches on. Being an academic book there is some theory thrown in as well at the start and end about different ideas on how countries change. It all makes for an excellent history with a unique thesis which is different from other books on Iraq. Her ideas are applicable to current events as well as Iraq is again ruled by an oligarchy, oil still makes the state unresponsive to the public, and the government uses its wealth to support itself rather than grow the country overall.