Review Liberate And Leave, Fatal Flaws In The Early Strategy For Postwar Iraq 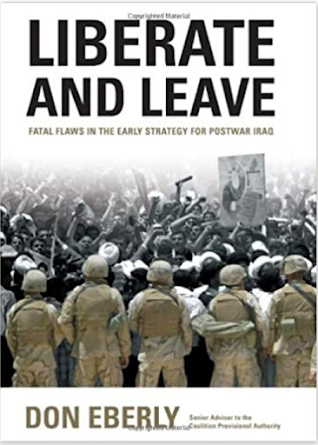 Liberate And Leave, Fatal Flaws In The Early Strategy For Postwar Iraq is about Don Eberly’s time working for the Office for Reconstruction and Humanitarian Assistance (ORHA) and the Coalition Provisional Authority (CPA). The book is mostly his personal recollections of his time in Iraq during the early U.S. occupation. It’s a bit rambling, but his main points were that the U.S. had no plan to rebuild Iraq, and he also questioned whether the Americans could create a democracy in Iraq given its history under Saddam Hussein.

Eberly’s ideas on the shortcomings of the U.S. occupation are the strong point of the book. He notes that the main advocates for the Iraq war such as Secretary of Defense Donald Rumsfeld were also the people who were the most against nation building. Rumsfeld for instance, wanted the smallest invasion force possible which resulted in not enough troops being deployed to ensure the peace and security of the country afterward. His ideas also led the Bush administration to advocate for a short stay in Iraq only dealing with humanitarian issues. The author believes that if the U.S. knew what it was getting into it would have never invaded. The result was when the ORHA entered Iraq it had to do everyone on an ad hoc basis reacting to the situation they found in Iraq rather than shaping events. It also meant the looting by Iraqis was never stopped and the Americans were left looking powerless. Eberly doesn’t blame Bush for this mess but rather people like Rumsfeld. He believes the top administration officials never told the president about the problems with postwar planning because they were pushing their own agendas about how well Iraq would turn out. This has been proven true by subsequent books. The U.S. put all its effort into coming up with a plan to depose Saddam and left what would happen afterward completely neglected. At the same time Bush should be held responsible because it was his decision to invade Iraq in the first place.

The author also asks whether the Americans could create a democracy in Iraq. He warned that setting up democratic structures and holding elections didn’t ensure a democracy would be formed. The Iraqis had to make their own institutions and ensure political freedoms for their political system to grow and he wasn’t sure that was going to happen. His experience working with Iraqis while running the Youth Ministry under the CPA left him with very mixed emotions. For every Iraqi he met that he admired and believed they were working for a better country he met others who simply wanted to take positions, set up patronage networks, settle scores, and enrich themselves. He was also greatly disappointed in the Iraqi exiles that came back feeling most of them were carpetbaggers who thought they could take over Iraq. Time would prove many of Eberly’s reservations were well founded. Iraq does have elections, a parliament, etc. but the ruling class are not responsive to the public, it is one of the most corrupt countries in the world, the media is limited by threats to their safety by the ruling parties, and more. Like he warned the structures and practices of the government are weak and so is its democracy.

While those two messages are the highlights of Liberate And Leave there are many inconsistencies with the rest of the book. For one, he writes that the deBaathification order by the CPA was based upon an evaluation of the situation on the ground about what to do with the Baath Party. In reality, the order was written in Washington D.C. by the Pentagon and given to Paul Bremer to implement. Second, he tries to deflect criticism that the CPA was staffed by young and inexperienced workers who got their jobs because they were Republicans. Eberly says all the people he knew were committed to the cause of creating a new Iraq and were highly skilled. Then it turns out he was talking about the ORHA and not the CPA! Third, he goes through all the sectors of Iraq the CPA tried to reform like the justice system and the economy but never says whether they were successful. It largely failed. Fourth, he has a whole chapter on Uday Hussein who once ran the Youth Ministry. Eberly had to take inventory of all of Uday’s personal items which included the number canes Uday had which Eberly brings up three times. Why is that important? The author was also disconnected from Iraqi society. He thought that ethnosectarian divisions were natural in Iraq, which is untrue. He wrote about how the CPA fixed up one of Saddam’s swimming pools in the Green Zone which became a huge gathering point for U.S. officials and soldiers, and how they had a disco at the top of a hotel. At the same time he notes that Iraqis were suffering from robberies, kidnappings, the growing insurgency, and a lack of services. The idea of writing about how Iraqis were not doing well while some Americans got to dance all night didn’t seem to strike him as a problem. The ORHA and CPA were in a bubble in the Green Zone largely cut off from the country they were supposed to rule and Eberly was an example of that.

Overall, Liberate And Leave has its ups and downs. There are definitely things a reader can learn from the book. His questions about building a democracy in Iraq are not often dealt with. He also talks about some of the major faults with how the ORHA and CPA were organized and operated. Then again, there are many others that discuss the faults with America’s plans for Iraq. He also includes many topics like Uday’s canes and excludes others like the failure of the CPA to change much of Iraq. That means you have to take the good with a lot of bad in this volume.