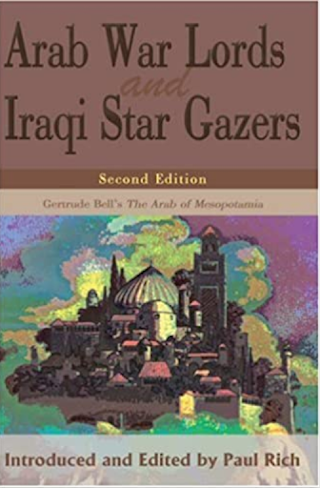 Arab War Lords and Iraqi Star Gazers is a collection of two pamphlets Gertrude Bell wrote for British troops entering Iraq during World War I. The first was printed in 1916 called The Arab of Mesopotamia and the second came out the next year Asiatic Turkey. The writings were part information guides to the lands and people of the Ottoman Empire and part propaganda justifying why London invaded.

Asiatic Turkey is more of a travel journal where Bell takes the reader from the Baghdad province to Mosul across to Syria and then north into Turkey. Along the way she describes the various people she met including Arabs, Kurds, Druze, Greeks and others. Most of it is pure description to familiarize British officers with the lands of the Ottoman Empire they were fighting over. There are a few jingoistic comments thrown in such as criticizing the Turks for never developing Iraq and claiming that the Arabs were oppressed by the Turks. It’s an interesting walk through turn of the century western Asia. You get a sense of all the different groups who were part of the Ottoman Empire. Bell was able to write about the area because she had travelled extensively through it before World War I which was why the British government hired her.

The Arab of Mesopotamia was a bit different because it was more of a propaganda piece for the British seizure of Basra. It starts off in a similar manner however going through the various tribes of Iraq such as the Bani Tamim, Jabour, Zubaid, as well as the Marsh Arabs of the south. Bell argued that the British should embrace the sheikhs because they were the real authority in the region. In turn the British could bring them order, stability and prosperity, which was missing under the Turks because they played divide and conquer with the tribes and ignored the provinces. This of course was the justification for World War I expanding to Mesopotamia. Bell’s main argument was that the Turks neglected Iraq and London would develop it through good administration.

If you read the text closely there are some contradictions in Bell’s claims however. For instance, she said that it would be easy to rule the tribes because they used age old traditions. Then she notes that the British political officers were using force, patience and persuasion to forge friendly relations with the sheikhs. If it was so simple to understand them why would the English be using force? In fact, it turned out bombing tribes was one of the main ways the British would rule them because they didn’t appreciate the taxes, bureaucracy, and foreign rule.

Arab War Lords and Iraqi Star Gazers is a very interesting read. If nothing else it gives a short glimpse into what the Ottoman provinces were like before the empire was dismembered. Bell has all kinds of tidbits about various sheikhs, tribes, peoples and major towns. It also gives the reader insight into the arguments made for invading Iraq. It came down to Bell believe that the United Kingdom would be a much better imperial power than the Turks. Finally, this is one of the earliest pieces in English on what would become Iraq.