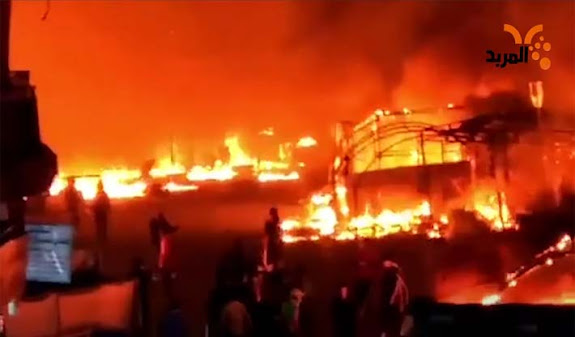 Protest tents burned by the Sadrists in Nasiriya (Al Mirbad)
On November 27 the Sadrist movement claimed it was a force for change and reform in Iraq while attacking a protest camp in Dhi Qar that left 5 demonstrators dead and many more wounded.

Moqtada al-Sadr called for his followers to come out into the streets on November 27. Several thousand marched to Baghdad’s Tahrir Square, while there were smaller gatherings in Maysan, Wasit, Diwaniya and Basra. Sadr Tweeted that the upcoming vote would rid Iraq of bad elements and that he stood with the righteous while one of his parliamentarians told the media that the movement stood for reform and would fix Iraq’s political system and stand up to the corrupt. The Sadrists are hoping for a large showing in the balloting and have even speculated they would be able to name the next prime minister. These were meant to show Sadr’s strength as he is one of the only leaders who can call such gatherings in Iraq.

The true nature of Sadr’s movement was shown in Nasiriya, Dhi Qar. There Sadrists marched to the Haboubi Square in the center of the city and attacked the sit-in camp that has been there for months. They shot at activists and threw petrol bombs that burned some of the tents. That led to 5 demonstrators being killed and 69 wounded. Sadr tried to co-opt the protests that started in October last year. In January 2020 however he withdrew his support and then in February Sadrists assaulted activists in Babil and Najaf leading to 12 deaths. It was apparent from the start that Sadr was only using the demonstrations to further his own political goals. By joining with the protests he was maintaining his image as an outsider from the political elite and standing with the youth. When he had no more use for them however he turned on them and used violence to let them know how vulnerable they were. This has been Sadr’s M.O. since 2003. He continues on with his father’s populist nationalist message while his armed adherents have fought and eliminated his opponents. Thus he talks about being a reformer while killing people in the streets.

Al Hurra, “He wants a Sadrist majority and the presidency of the Iraqi government … Al Sadr may end his oath,” 11/23/20

Al Nasiriya, “Security source: The events in Nasiriya end with five martys and 69 wounded, some of them seriously,” 11/27/20

- “Preacher of unified prayer to Sadrist supporters: We will continue the path of reform, regardless of the sacrifices,” 11/27/20

- “Al-Sadr Tweets: The Upcoming Elections In The Hands Of Righteous To Rid Iraq Of All Abusers From Inside And Outside,” 11/27/20

- “Al-Shammari confirms the ability of the Sadrist Movement to change, reform and correct the political process,” 11/27/20