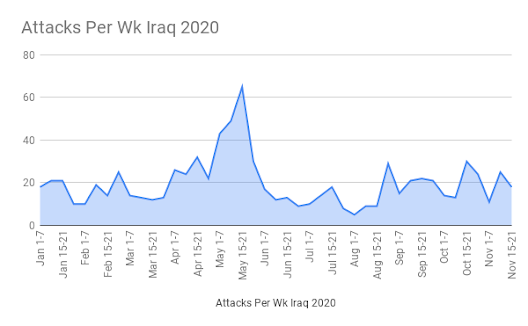 Violence across Iraq continues to fluctuate. There were 11 security incidents reported in the media the first week of November increasing to 25 the next week and then down to 19 the third week. One of those was by a pro-Iran Hashd group leaving 18 by the Islamic State. This has been the pace of attacks for weeks now.

Ashab al-Kahf that is likely a Kataib Hezbollah front group took responsibility for a rocket attack upon the Green Zone. Several fell short killing one child and wounding five others in Baghdad. This was in retaliation for three members being arrested. The group threatened more attacks if they were not released. The last time a pro-Iran group carried out an operation was on October 24 in Basra and the last time Baghdad was hit was October 5.

In total 18 were killed and 25 were wounded during the week. 4 Iraqi Security Force (ISF) members, 5 Hashd al-Shaabi and 9 civilians died and 5 civilians, 8 Hashd and 12 ISF were injured. Salahaddin had half the casualties with 22.

In the Garma district a policeman was killed inside his house during a home invasion and his car was burned. Attacks in Anbar remain very low. IS mostly brings men and material over from Syria into the province.

Besides the rocket attack there was a sticky bomb in Madain in the south and a shooting in Husseiniya in the north of the capital province that left two dead total. This is the kind of activity the insurgents are now carrying out in Baghdad. There is no longer an attempt to infiltrate into the city. Rather they are carrying out small scale attacks in the periphery usually northern and southern towns like where these two incidents took place.

Diyala saw only 3 incidents which included an attack upon village, a shooting at a checkpoint and an intercepted infiltration attempt. Two of these came in the north while one was in Muqdadiya in the center. Most attacks take place in the middle and northeast of the governorate but lately IS has been reaching out to the north. The security forces also made a deployment to the Abu Said district in Muqdadiya. This wasn’t in response to the militants however but rather a tribal dispute. This is one of the areas that regularly gets attacked but it took two tribes fighting each other to get the government to move into the area.

Kirkuk had three incidents as well. That involved an IS member killed while planting a bomb and assaults upon two checkpoints.

The Islamic State blew up two electricity towers in Ninewa. This is the first time in a while that any infrastructure has been attacked. The other three incidents were small scale and included three suicide bombers being arrested.

Salahaddin witnessed the most serious incident of the week. An IED hit a civilian car and when the security forces arrived to investigate they were ambushed. 10 people died including a police director and mayor while 8 police were wounded. IS has recently been targeting ISF officers since the spring and this was the latest example.

- "With the participation of security forces and the people … foiling an ISIS attack on the home of an Iraqi official," 11/21/20

- "A rapid reaction force coming from Baghdad is deployed in Abu Saida, Diyala to enforce the law," 11/15/20

- "The Popular Mobilization Forces and the army carried out a search operation in search of wanted men, east of Fallujah," 11/22/20

- "The Popular Mobilization Forces thwarted an ISIS attack against one of its points in Kirkuk," 11/19/20

- "Thwarting an infiltration attempt by ISIS to target a security center on the outskirts of Al-Abara district, northeast of Baqubah," 11/16/20

Al Sumaria, "Thwarting an infiltration of ISIS on the island of Siniya," 11/20/20