Review Revolt On The Tigris, The Al-Sadr Uprising And The Governing Of Iraq

Etherington, Mark, Revolt On The Tigris, The Al-Sadr Uprising And The Governing Of Iraq, Ithaca, London: Cornell University Press, 2005 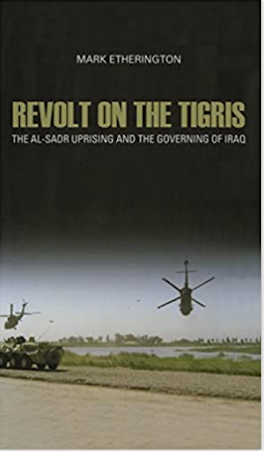 Revolt On The Tigris, The Al-Sadr Uprising And The Governing Of Iraq is the recollections of Mark Etherington, a British Foreign Service officer who was appointed the Coalition Provisional Authority’s (CPA) head of Wasit province. Etherington felt like the entire endeavor was doomed from the start. Neither the British government nor the CPA provided any real support that would make the effort successful. That didn’t mean Etherington didn’t try his hardest but the odds were stacked against him, which was what he conveyed in his book.

Right from the start Etherington was struck by the situation he was placed in. First, he felt like he was picked because London couldn’t find a diplomat to do the job. Next, he was told his team would number only eight and be expected to run an entire province. Etherington believed that the Coalition had to push changes as quickly as possible but how could it do that with such a small contingent? Third, Etherington had served in Kosovo and learned that establishing law and order and control were essential in post-conflict situations. Wasit was the home of a Ukrainian army unit that had no experience in such countries and were completely reluctant to use force. Also there were no CPA personnel assigned to Wasit to deal with the police or courts, etc. Fourth, London said it wanted all its personnel in Iraq to be protected but had no security plan for Wasit. Instead a private contractor with just a few members would be the only security for the CPA in Kut. Much has been written about the faults of the CPA. Almost all of that has focused upon its head Paul Bremer and what it was doing in Baghdad. Very little has been spent on its work out in the provinces where it was spread hysterically thin as Etherington points out. The author wondered how the Coalition was supposed to transform Iraq with such an ad hoc operation.

The second half of the book is about Etherington’s time in Wasit that included the lack of resources and then the Sadr uprising in early 2004. The CPA office in Kut had no protection. Kellogg Brown and Root were supposed to set up blast walls, furnish it, and provide services but refused to leave the Ukrainian base they were at. That meant Etherington had to improvise. The author felt isolated in Kut because his team only had two security vehicles to get around the province. That meant they couldn’t project their authority outside of the capital. It also meant they couldn’t assess the needs of Wasit for things like reconstruction projects. Etherington ended up hiring Iraqi engineers to survey the governorate and pick what needed to be funded. The police were doing nothing and when the CPA tried to get rid of bad officers the Interior Ministry told the police chief to ignore the suggestions. Etherington and his team were able to create a provincial council and pick a governor. Most importantly, after the CPA went after the Sadrists they attacked the Kut office as part of their revolt. The Ukrainians refused to do anything and Etherington was afraid they would be overrun. The team was able to get out and make its way to Baghdad but the author felt a deep sense of defeat. Everything his team had tried to do in Wasit was ended in just a few days of fighting. He would eventually return but the CPA had announced it would end in June 2004 and so it could do even less than before. The author’s only consolation was the fact that the people of the province didn’t rally behind Sadr. Etherington reflected that the CPA was never fully staffed and that hurt its provincial effort. It never got sufficient logistics. The contractors like Kellogg Brown and Root never came through. The lack of power the CPA had in Wasit meant that most of the population sat on the sidelines. Etherington’s team did get some projects funded and got a council and governors in office, but he felt largely like a failure by the end.

Southern Iraq is mostly ignored in western accounts of the U.S. occupation of Iraq. So is the Coalition Provisional Authority’s work outside of Baghdad. Etherington writes an engaging account of his short stint in the country and how everything seemed to be done on the fly with little hope of success other than America’s belief in itself. Etherington tried his best and stood strong during the Sadr attack on his office, but he was thoroughly disappointed with the end results.