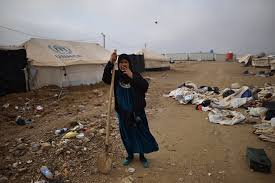 (AP)
Prime Minister Mustafa Kazemi has decided that he will end the displacement crisis in Iraq by closing down all the camps and declaring the problem solved. This has been the wish of all the previous premiers since Nouri al-Maliki. None of them seemed to actually care about the displaced and none of them succeeded either, something Kazemi doesn’t appear to have taken to heart.

When Kazemi first took office in April he ordered internally displaced (IDPs) camps to be shut down. The COVID-19 pandemic however delayed that plan. In August the first camps were shuttered and in November the premier confirmed that this process was to be completed by the end of the year. As a result, three camps, one in Baghdad, one in Karbala and one in Diyala were closed in October and another five in Baghdad and Diyala are scheduled to do the same. Each family that leaves is supposed to receive 1.5 million dinars ($1,263.03) during their first year out of the camps. With the government facing the worst economic crisis since 2003 and it being unable to pay its employees and pensioners it’s unlikely that these payments will be made any time soon.

Kazemi follows in the footsteps of his predecessors who tried and failed to do the exact same thing. Nouri al-Maliki, Haider al-Abadi and Adil Abdul Mahdi all said they wanted to end the displacement file during their administrations and ordered camps to be shut down as a result. None of them accomplished their goal. Their main motivation appeared to be looking for a political win without actually tackling the problem.

This has always drawn criticism from aid groups and the displaced themselves. In July the International Organization for Migration reported that there were 330,324 people in camps. With the rate of return there are still likely around 300,000 still in that situation today. Many of those forced out of camps remain displaced because they can’t return to their homes because the area has not been rebuilt, there are no jobs or service, and because Hashd units and tribes have banned them accusing them of being Islamic State families or seized their property. The government has not dealt with any of these issues which shows they are not taking the plight of the IDPs seriously. They just want to claim a victory without any of the follow through to make sure the displaced are taken care of.

Al Mada, “Daesh attacks in Diyala and eastern Tikrit to blackmail civilians and failing at soft return to Anbar,” 5/25/19

Al Masalah, “Governor of Salahaddin: The decision to close the camps and the return of the displaced to their areas is irreversible,” 11/8/20

- “Human Rights Commission: Armed parties prevent the return of the displaced to their areas,” 11/12/20

Sotaliraq, “Governor of Ninewa: Closing all displacement camps within days,” 11/8/20