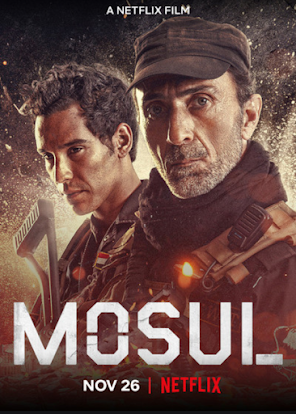 Netflix’s Mosul is an ode to the men of the Ninewa SWAT. The movie follows a squad from that unit who are in the midst of the end of the battle for the city. They are on a special mission which is not revealed until the very end which proves to be very moving. It shows their sacrifices, their fighting prowess and their souls in the midst of a bloody fight.

The start of the film highlights how intense it will be. Two police are cornered in a building in Mosul being attacked by overwhelming numbers of Islamic State fighters. It looks like they are going to be overrun when SWAT shows up and kills all the militants. One of the police are recruited into the unit and off they go on their mission into the city. This is the pace of the film. There are short and sharp gun battles interspersed with the SWAT members talking.

The movie hits on many issues as well. The start has images of a destroyed Mosul which is striking. It looks like nothing was untouched. Then it captures the little things such as when the unit takes a house and one man charges his iPhone while another breaks out a shisha/hooka to have a smoke. Another time they stop when they see two boys and convince one of them to come with them to take him to safety. This shows that despite being in the middle of a battlefield that destroyed an entire city they are still human beings. They try to enjoy their short breaks and look out for civilians.

The end is a striking comparison to the rest of the story that is mostly made up of fighting and dying. It makes for a very powerful story about one small group of men who gave everything for the city of Mosul.