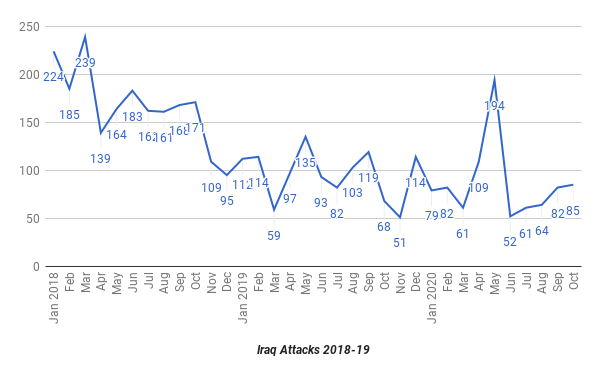 While the total number of security incidents went down from September to October in Iraq, Islamic State operations in the country have slowly but surely been going up for the last four months. This doesn’t look like a Fall offensive as originally predicated because there has been no spike, but rather the insurgents picking up the pace of their attacks overall. At the same time pro-Iran groups have largely halted their campaign against the United States.

There were a total of 93 incidents reported in Iraq during October. That was down from 113 in September, but up from 88 in August, 73 in July, and 60 in June. 8 of those incidents were by groups aligned with Tehran leaving 85 by the Islamic State.

Iranian backed Hashd groups started a campaign against the U.S. and western targets in January. The number of attacks have gone up and down throughout the year. Starting in June their attacks picked up as the U.S. and Iraq entered into talks over a new security agreement. Then in the middle of October a front group for the resistance factions as they like to call themselves said they would halt attacks to allow the Americans to withdraw from the country. That meant there were only 7 incidents by them in October versus 31 the month before. There were two attacks however after the ceasefire was announced, one on October 11 and then another on October 24 when convoys carrying supplies to the U.S. were hit by IEDs in Muthanna and Basra. The resistance is made up of various groups and they have formed new front organizations as well to deny responsibility. Not all of the factions may be controllable leading to the last two incidents.

The number of Islamic State attacks have steadily increased since the summer. There were 52 incidents in June then 61 in July, 64 in August, 82 in September and 85 in October. The types of attacks have changed as well. In August for instance there were just shootings and IEDs. By September however there were car bombs and suicide bombers. 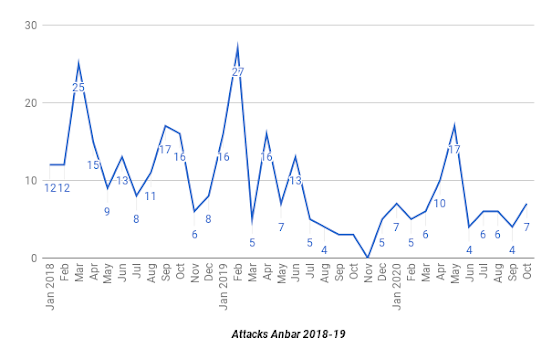 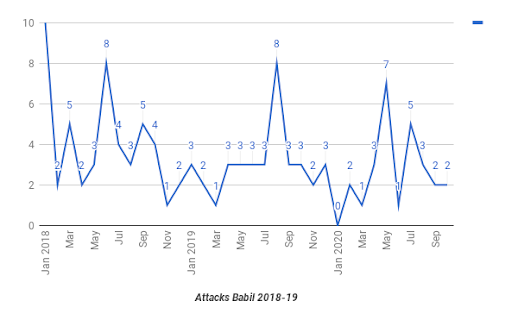 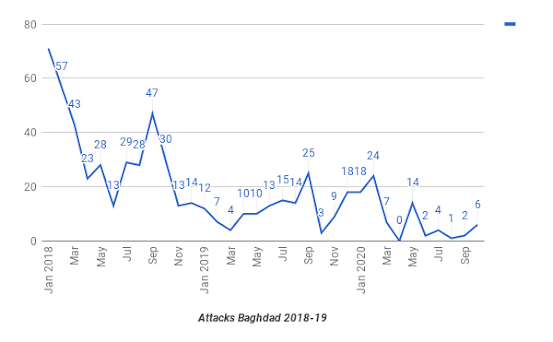 Anbar, Babil, Baghdad, and Irbil had incidents in the single digits during the month. Anbar had 7 attacks up from 4 in September. That included a motorcycle bomb in Fallujah, a kidnapping in the Rutba district and an attempt on the life of a health official in the Ana district. These were unusual in a province where the militants mostly focus upon smuggling across the Syrian border. Babil saw 2 incidents by IS included an attempted assassination of a Hikma parliamentarian in Hilla that killed his nephew. Again, this was a change as the insurgents usually just set IEDs for Kataib Hezbollah members in their base in Jurf al-Sakhr. Baghdad had 8 incidents in October an increase from 2 in September. The standout was an attack upon a village in the Abu Ghraib area in the west. IS has given up on infiltrating the city itself and mostly has small scale harassing attacks on the perimeter. Assaulting a town therefore was a large escalation. There were two IEDs in Irbil’s Makhmour district in the south. This is a disputed area which IS has tried to exploit during this year as there is a gap between the government and Kurdish security forces. 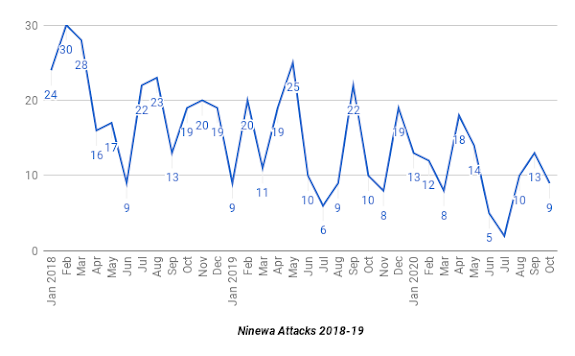 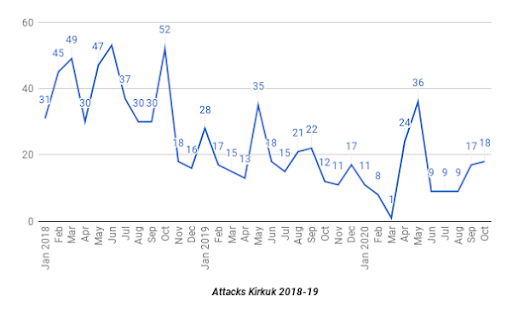 Ninewa and Salahaddin remained secondary fronts for IS. There were 9 incidents in Ninewa down from 13 the month before. A mukhtar’s son was assassinated and a checkpoint was shot at. Like Anbar, the province is mostly used for logistics. In Salahaddin, there were 10 incidents which has been about the average for the last 5 months. One town was attacked and there were three gun battles. Besides that the biggest event was Asaib Ahl Al-Haq being accused of kidnapping 12 people in the Balad district with 8 of their bodies showing up later. This was the latest example of the government not being able to control the forces under its authority. 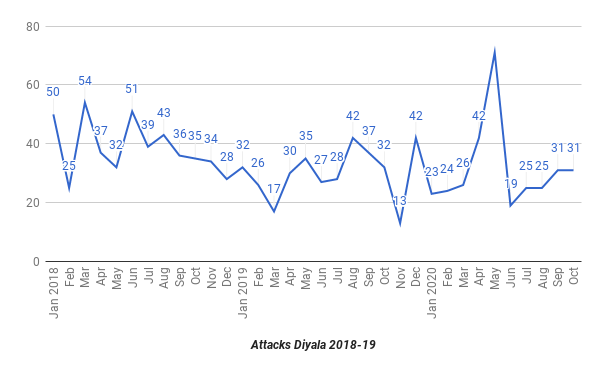 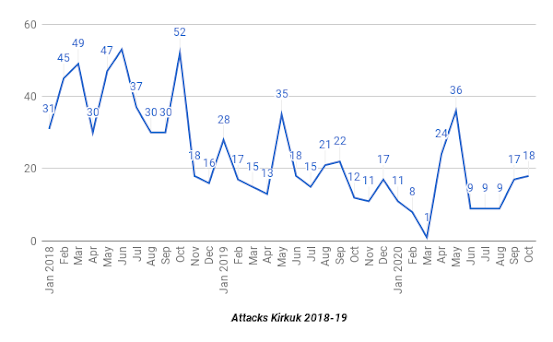 Diyala and Kirkuk remained the core areas of IS in Iraq. Diyala had 31 incidents the same number as September. There was one shoot out, one kidnapping, 2 checkpoints were attacked, 2 attacks on sheikhs including one who had his body booby trapped with a bomb after he was killed, 2 towns were assaulted and four were hit by mortars. In Kirkuk there were 18 attacks including 1 gun battle, 1 checkpoint shot at and three towns attacked and one hit by mortars. IS has picked up raids on towns since June. In both provinces the goal of these operations is to drive locals out so that the militants can operate, train and rebuild without any interference. It is also meant to force people to pay taxes. IS has de facto control of many rural areas of central and northeast Diyala in Muqdadiya and Khanaqin districts. There are dozens of towns that are empty and hundreds of people have been forced out. It looks like IS is trying to do the same in southern Kirkuk.

- "The death toll from the terrorist attack in Muqdadiya increased to 7 martyrs and wounded," 10/27/20

- "An IED Explodes, Targets An Int'l Coalition's Convoy In Highway Between Samawah And Diwaniya," 10/11/20

Shafaaq News, "An armed attack kills the son of a local official in Ninewa," 10/9/20