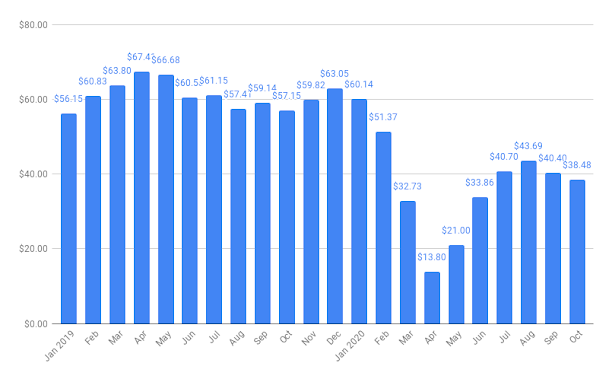 Iraq’s exports and revenues increased in October despite prices for its crude declining for the last two months.

In October Iraq exported an average of 2.87 million barrels a day of oil. That was up from 2.613 million barrels in September, and the highest amount since 3.2 million in May. Iraq Oil Report noted that this was due to the Oil Ministry ordering a 250,000 barrel a day increase in production last month. This was likely due to the government being desperate for funds as it is facing a huge budget deficit with the collapse in the petroleum market this year due to the COVID-19 pandemic and the Saudi-Russia price war. This also means Iraq is continuing to violate its agreement with OPEC+ to cut production to try to raise prices. Iraq has reduced production overall this year, but not enough to meet its quota. Not only does it need the money but the contracts it has with international oil companies obligates it to pay for unused production.

The increase in exports resulted in an increase in revenues despite prices going down. Iraq earned $3.43 billion in October up from $3.167 billion in September. Prices however have gone down since August when they were at $43.69. In September a barrel of Iraqi crude sold for $40.40 and then $38.48 in October the lowest price since June. The OPEC+ deal has raised prices, but fear over the continuing effect of the pandemic has meant there is so some uncertainty about the short term future of the oil market.

The slight increase in profits in October is still not enough to cover Iraq’s bills. It is still running a huge budget deficit and will need further borrowing to finish out the year.