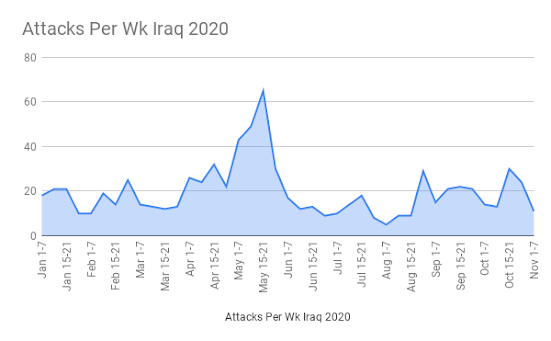 The number of security incidents recorded in Iraq dropped the first week of November by half from the previous week. Overall, violence has gone up and down since the fall.

From November 1-7 eleven security incidents were reported in Iraq. That compared to 24 the last full week of October, 29 the third week of that month, 13 the second week and 14 the first week. It was the lowest amount of incidents since the third week of August when there were 9 by the insurgents.

There were 17 casualties as a result. 1 Hashd al-Shaabi, 1 Iraqi Security Forces member (ISF), and 5 civilians died along with 3 civilians and 7 ISF that were wounded. Diyala had the most casualties with 10, while the other provinces were in single digits.

In Rutba in western Anbar towards the Jordanian border a man who was kidnapped towards the end of October was found executed. The security forces also launched a sweep through the Seleja area.

Two soldiers were hit by an IED in northeast Babil’s Jurf al-Sakhr. That district is a large Kataib Hezbollah base and IS’s favorite target in the governorate.

A checkpoint was shot at, a town was assaulted and its fields burned, and a police station was attacked in Diyala. Of the five incidents, three were in Muqdadiya in the center and two were in the Khanaqin district in the northeast. These are the areas where IS is most active in the province. It is asserting its control of rural areas by forcing out locals and intimidating the security forces. The government also launched a large sweep through the Khailania area of Muqdadiya after a sheikh was murdered there and his body was booby trapped with a bomb.

A member of the Hashd was killed when his house was attacked in the Hawija area of southern Kirkuk. The security forces also searched villages along the Tigris River.

In Ninewa, a checkpoint was hit by gun and mortar fire, a mukhtar was assassinated and two police were hit by an IED.

An infiltration attempt in Al-Eith in the Dour district in the center of Salahaddin province was intercepted by the Hashd.

Baghdad Post, "The second in a week … the ISIS terrorists launch an attack on an army security post south of Mosul," 11/1/20

NINA, "A large-scale security operation was launched north of Al-Muqdadiya, in Diyala Governorate," 11/1/20

- "The Number Of Victims Of The Double Bombing In Al-Abara, Diyala Increased To 9 Martyrs And Wounded," 11/5/20

- "A Security Operation To Search A Number Of Villages In Kirkuk," 11/7/20- "Thwarting an ISIS attack on a tribal mobilization site near Jalawla in Diyala," 11/2/20

- "Two soldiers were wounded by an explosive device north of Babylon," 11/7/20

Shafaaq News, "ISIS burns an orchard and clashes with the army and residents in Diyala," 11/3/20