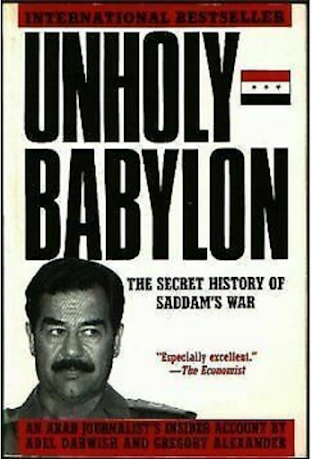 Unholy Babylon, The Secret History of Saddam’s War was released right after Iraq’s 1990 invasion of Kuwait. It starts by providing some historical background to Iraq-Kuwait relations, the rise of Iraq as a regional power and then finishes with the events that led Saddam Hussein to take over his neighbor. Journalist Adel Darwish and Gregory Alexander which was a pseudonym argue that Baghdad’s regional ambitions which were ignored by the West led to the Gulf conflict.

Darwish and Alexander begin with a history of Kuwait and Iraq. In 1710 Sheikh Sabah bin Jaber arrived in what would become Kuwait and established his rule there by the next decade. The rivalry between the Ottomans and Persians allowed Kuwait to carve out its autonomy. In 1897 the Ottoman governor of Baghdad tried to assert control over Kuwait leading the sheikh to go to the Russians to pressure the British to give it protection. That was successful and in 1898 London signed a treaty with Kuwait. In 1913 the British and Ottomans agreed to recognize Kuwait as a separate part of Istanbul’s empire. After the creation of Iraq in 1932 Baghdad recognized the Iraq-Kuwait border in a deal with England in order to be admitted into the League of Nations. Iraq proved less than happy with that. In 1938 Iraq asked the British to allow it to carve out a new route to the sea through Kuwait, then requested control of the Warbah Island in the Persian Gulf, and finished the year with King Ghazi claiming Kuwait as part of Iraq. After the monarchy was overthrown in 1958 General Abd al-Karim Qasim made the same claim. Under Baathist rule Iraq would demand Kuwait turn over Warbah and Bubiyan Islands to it so that it would have greater access to the Gulf. Conventional wisdom is that the British gave power to the Sabah family to rule Kuwait, but it was actually ruling before the English arrived. London did ensure its autonomy under the Ottomans and then its eventual independence. Although successive Iraqi governments would lay claim to the kingdom its main demand was for a larger coastline.

Another major topic covered is Iraq’s relations with Europe and the United States. When President Bakr and the Baathists seized power in 1968 they backed radical groups against the Palestinian Liberation Organization and other Arab countries. They also signed a friendship treaty with the Soviet Union which put it in the center of the Cold War in the Middle East. The Nixon administration responded by giving military aid to the Kurdish revolt. That all changed with the 1979 Iranian Revolution. When Iraq invaded Iran in 1980 the West supported Baghdad not only because it was afraid of the spread of Khomeinism but because it could sell billions of dollars of armaments to Saddam. That also meant European capitals and Washington said little about Saddam Hussein’s dictatorship and repressive rule such as the Anfal campaign against the Kurds which occurred right after the Iran-Iraq War ended. Darwish and Alexander have several chapters going into great detail about how not only the West but other countries around the world such as Brazil and China armed Iraq and helped it develop its weapons of mass destruction and nuclear program. They provide the names of not only the companies involved but many times the politicians such as French President Francois Mitterrand who facilitated the deals. The West’s lean towards Iraq allowed it to build up one of the largest militaries in the world which gave it power and prestige in the Middle East. It also put it heavily into debt to pay for the Iran-Iraq War.

The book finishes with the events leading up to Iraq’s invasion of Kuwait. The authors provide all the main arguments made to explain the conflict between the two such as Saddam wanting to dominate the Gulf and the economic problems Iraq had after the Iran-Iraq War, Baghdad demanding to change the border with Kuwait, and arguments with OPEC. Saddam for instance claimed Kuwait and the United Arab Emirates were conducting economic warfare against Iraq by overproducing and driving down the price of petroleum depriving it of much needed cash to pay off its debts resulting from the war with Tehran. In July 1990 however OPEC agreed to raise the price of oil which seemed to have resolved that issue. Darwish and Alexander believe that Iraq’s desire to become the leader of the Arab world, its continued demands for Kuwait’s Warbah and Bubiyan Islands, Kuwait constantly reminding Iraq to pay back its debt while other countries were forgiving it, as well as the Bush administration emphasizing good relations drove Saddam’s actions. Not only that but both the West and Kuwait ignored all the signals that Iraq was going to invade. They both seemed to believe that Saddam was bluffing. All together Iraq felt that Kuwait would give into its pressure and that the U.S. would not intervene.

Unholy Babylon does a good job laying out both the larger historical issues and the immediate events that caused the Kuwait invasion. It obviously wasn’t published simply to cash in on the interest in Iraq caused by the 1990 events. The amount of research the two authors did and the details they provided on the arms deals Iraq made alone show that they had been spending a lot of time on Saddam long before his decision to seize his neighbor’s territory. It’s therefore of interest to historians as well as people who want to know about what led to the Gulf War.