Review Inside The Resistance, Reporting From Iraq’s Danger Zone 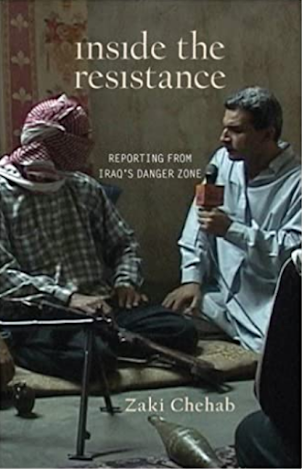 Inside The Resistance, Reporting From Iraq’s Danger Zone is a completely rambling collection of thoughts by journalist Zaki Chehab about the first two years of the U.S. occupation of Iraq. From the title and the first few chapters the reader would think the book is about why there was an insurgency in Iraq. That would be misleading as after that the book goes in all kinds of directions from the Iraqi opposition to Saddam and the American neoconservatives to the regional impact of the war in Iraq to the role of Palestinians in the country, and then some ideas on how Iraqi government might turn out. There is little rhyme or reason to the chapters and lots of repetition. Zaki was a reporter who obviously dearly missed the aid of an editor when he wrote this book.

The start of Inside The Resistance is the most interesting part of Zaki’s work. In 2003 the author travelled through Ramadi, Samarra, Fallujah, Tikrit and Mosul and talked with some of the initial insurgents groups fighting against the Americans. Some said they were nationalists others were former regime members. When they were asked if they killed civilians they routinely said they only killed collaborators. The author was one of the first to note that there was a Salafi community in places like Fallujah before 2003 and that Saddam Hussein’s 1990s Faith Campaign encouraged the growth of their beliefs. Zaki then turns his attention to Ansar al-Islam which was formed in Sulaymaniya pre-invasion and Abu Musab al-Zarqawi who were the first Salafi insurgent organizations. By 2005 Zaki heard militants start talking about splits between the nationalist groups and Zarqawi. People in Fallujah for instance after the second battle for the city said that the U.S. called the city a Zarqawi stronghold but most of the fighters had nothing to do with the Jordanian. Here the book lays out some of the earliest militant groups, their origins and differences. The insurgency began with small units of Sunnis fighting for either Iraqi independence from the Americans to return the Baath to power or to create a Salafi society. These divergent groups only had one thing in common, wanting the U.S. out of Iraq.

There are some chapters afterward that try to explain why there was resistance to the U.S. occupation. The author focuses upon the mistreatment Iraqis faced at the hands of the American forces such as house raids, the use of dogs, the Abu Ghraib scandal where American soldiers photographed themselves torturing prisoners as well as other abuses by American troops in other parts of the country. Zaki tries to tie this together with a general idea of Sunni discontent with the new Iraq but he goes off course a bit. He points out that American mistreatment along with deBaathifcation which fired thousands of people led to resentment against the U.S.. The author’s one problem is that he dismisses Sunnis being opposed to Shiite and Kurdish parties dominating the new government claiming they were only against it because it was imposed by the U.S. He also returns to the American missteps again and again and again instead of it being in just one chapter. It gets vary repetitious.

The rest of Inside The Resistance is a total mess. He talks about the planning for the 2003 invasion and then the U.S. administration of Iraq but gets all kinds of things wrong. He claims that the State Department came up with the idea of the Coalition Provisional Authority when it was the Pentagon. He interviewed a representative of the Iraqi National Congress who said it had a plan for its militia to take control of all the cities and provinces behind the invading U.S. forces but it never had the resources nor backing of Washington to do that. He writes that Undersecretary of Defense Douglas Feith asked the State Department to put together a postwar plan for the country that led to the Future of Iraq Project which isn’t true. He talked with Sunnis and Kurds almost exclusively which means he never gave an adequate explanation of Shiite parties or personalities outside of Ayatollah Ali al-Sistani and Moqtada al-Sadr. He even showed his bias towards them when he said he hoped the Iraqi government would be led by secular Arabs and Kurds that would exclude the Shiite religious parties. Things get worse when he has a whole chapter claiming Palestinians influenced the insurgency and that Palestine was always an important issue for Iraq from the creation of Israel in 1948 until after 2003. One of Zaki’s first job as a reporter was to write about Saddam Hussein’s support for Palestinians groups that were opposed to Yasser Arafat so it appears he wanted to throw that in even though it had little do to with the rest of his book. These parts show that the author had no theme to his writing. He just skipped from topic to topic. Most importantly he never fully represented the majority of the country taking almost all his cues from Sunnis and Kurds.

There are some bad books about Iraq and this one should be put in that category. The opening chapter on the early insurgency is the only redeeming quality of Inside The Resistance. The rest can be ignored and the reader would be better off.