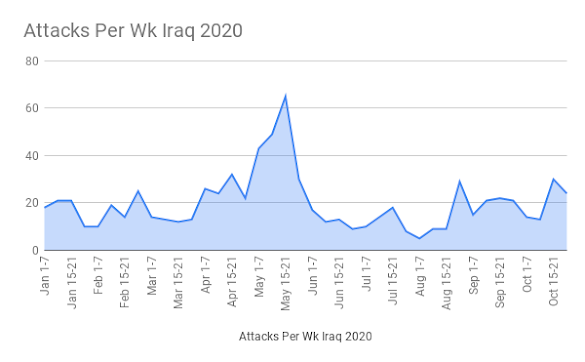 After a slight dip at the start of October violence has gone back up in Iraq. During the third week of the month there was also an attack by a pro-Iran group ignoring the ceasefire that was declared this month.

There were a total of 25 security incidents reported in Iraq from October 22-28, 2020. One of those was an IED that hit a convoy in Basra carrying supplies to the U.S. This was the first attack by a pro-Iran group since October 11 when a halt to operations against the Americans was announced by a front group.

There were 16 deaths and 24 wounded during the week. 2 Hashd a-Shaabi, 3 Iraq Security Forces (ISF), and 11 civilians lost their lives and 1 Hashd, 10 ISF and 13 civilians were injured. Diyala had the most casualties with 22.

Anbar and Baghdad remained the quietest provinces in Iraq. In the former there were two sticky bombs, one aimed at a local health director, and a kidnapping, while in the capital militants shot and wounded 2 soldiers in the Tarmiya district in the north. Anbar is used as a logistics hub by IS so there are few incidents there while the insurgents have largely given up on trying to get into the capital city itself.

Kirkuk and Salahaddin saw its usual mix of shootings, 5 total, and IEDs, 3 between them. A village was attacked in the latter, the first time that’s happened since June.

Diyala returned as the most violent area of Iraq. A town was attacked, there was one gun battle and a police station was assaulted. IS also killed a sheikh and booby-trapped his body which went off when a crowd gathered to investigate killing 5 and wounding one. Of the 11 incidents 3 were in the Khanaqin district in the northeast and 5 were in Muqdadiya in the center. These are the two main areas IS operates in, and were it is seeking rural domination of the populace and security forces.

Al Hurra, "Iraq .. Two people were killed in an attack carried out by unknown persons kilometers away from Al-Farhatiya," 10/27/20

- "A policeman was killed and another wounded in a terrorist attack in the Waqf Basin in Diyala," 10/25/20

- "Thwarting an infiltration attempt by ISIS in the outskirts of Um al-Hata in Diyala," 10/23/20

Shafaaq News, "Civilian assassinated and the death of two girls in two accidents in Diyala," 10/23/20

- "Diyala … ISIS attacks a village and clashes with its residents and security forces," 10/22/20

- "Six people, including members of one family, were wounded by two explosions and a traffic accident in Diyala," 10/28/20