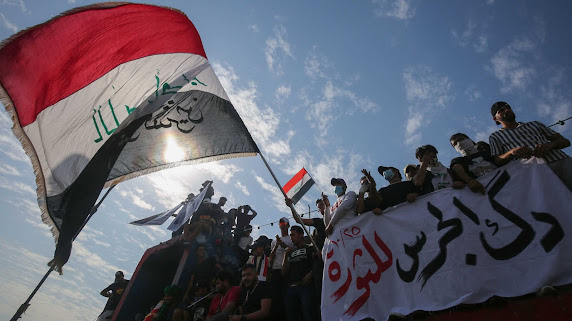 (Al Hurra)
After people marked the October 25 anniversary of the protest movement in Baghdad’s Tahrir Square there were clashes with the security forces and some of the sit-in tents were burned. Activists later accused infiltrators and political parties of these acts. They ended up leaving the square which had been occupied for over a year although in fewer numbers in recent months. The Basra governor then closed down the sit-in camp in Basra city leading to confrontations. The authorities and pro-Iran groups appear to be winning this battle as there have been few demonstrations in recent days.

On October 25 Iraqis from across the south and Baghdad converged on Tahrir Square to mark the one year anniversary of the outbreak of widespread violence against the protest movement. Clashes began when some people were cut off from entering the square. Then people tried to cross some of the bridges into the Green Zone and rocks and Molotov cocktails were thrown at the police. Some of the sit-in tents were set on fire. The next day organizers said they were packing up their things and leaving the square claiming the violence was caused by outside agitators. The Baghdad Operations Command announced on October 31 that Tahrir Square was opened because there were no more protesters there. The government touted this as a victory saying a major part of central Baghdad was now opened once again.

On that same day Basra Governor Assad Abdul Amir el-Eidani ordered the security forces to clear a road leading to the provincial government building in Basra city. What happened was the police used that to close down the sit-in square there. That led to tear gas being used and a running battle with protesters. The next day people came out into the streets in Dhi Qar, Basra, Karbala, Najaf, Babil, Muthanna, Maysan, Wasit, Diwaniya and Baghdad in support of the movement. There were more confrontations in Basra as activists accused the governor of trying to shut down the protests. On November 6 people tried to put tents back up in the square and were fired upon killing 1 demonstrator and wounding 7. Overall however there have been few protests in the south over political reform. That points to the movement struggling to survive.

These events show that the protest movement has withered. Months of threats, intimidation, kidnappings and murders by pro-Iran groups have taken their toll. Many people have fled to Kurdistan or left Iraq all together. As a result, protesters can no longer draw the numbers and more importantly sustain their demonstrations like they used to. The forces of repression have seemingly won this battle but the discontent with the status quo only appears to be growing amongst the Iraqi public. Protests have been going on in Iraq every summer for the last several years and have only gotten bigger and bigger. Unfortunately the elite haven’t listened to the people because enacting reform would threaten their power and money.

Habib, Mustafa, “Some of the protest tents are burning now in Tahrir Square in #Baghdad. It is part of the chaos, divisions and infiltrations by political parties and armed groups,” Twitter, 10/25/20

Al Mada, “Coordinators raise the tents from Tahrir Square and disown the rioters,” 10/26/20

- “Security forces disperse the demonstrators in the Basra sit-in square,” 11/1/20

- “Staging a sit-in in Basra: Many cases of suffocation have gathered refusing to raise tents,” 10/31/20

NINA, “The Governor Of Basra Orders Opening The Road Leading To The Provincial Office, Near Al-Bahriya Square,” 10/31/20

- “A Protester Killed And 7 Wounded During Dispersal Demonstrators In Basra,” 11/6/20