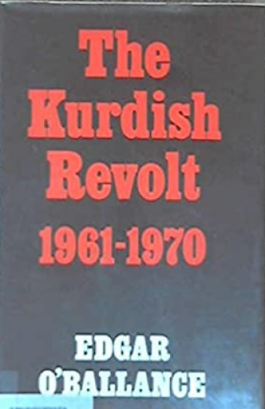 Edgar O’Ballance wrote a very well researched and detailed exploration of the development of Kurdish politics across Iraq, Iran, Turkey, Syria and the Soviet Union that came to be focused upon Mullah Mustafa Barzani and his decades long struggle with the Iraqi government. Most of the book is about that latter topic and argues that the war between Baghdad and Barzani was doomed to perpetual stalemate. The government could never penetrate the mountains the Kurds retreated to and was never serious about giving them any formal rights. On Barzani’s side he spent as much time fighting other Kurds as Baghdad and was almost always on the defensive. Despite this deadlock year after year neither side ever changed its strategy.

The Kurdish Revolt 1961-1970 begins with how the Kurds were split across several different countries and the internal divisions within the people that hindered Kurdish nationalism. After World War I the USSR and Turkey attempted to completely wipe out Kurdish tribalism and culture with the latter not even calling them Kurds anymore but Mountain Turks. The French in Syria favored them and then the independent Syrian government ignored them. The British, Persia and Iraq tried to militarily subdue them with mixed results. They would all recruit Kurdish tribes to fight against the ones that were in revolt. Although O’Ballance’s focus was upon Iraq he would constantly bring up Kurds across the region to give some context and background. For example, he would use this to help explain why Mullah Mustafa Barzani the main Kurdish leader in Iraq would find both support from foreign countries who wanted to use him against Baghdad and then rejection because they were afraid of the effects upon their own Kurdish populations. Barzani was also beset by rivalries with other tribes which made it difficult to form a single Kurdish party to represent the community.

Most of the book is about the struggle of Kurds to create a movement in Iraq. That started with Sheikh Mahmoud Barzanji who set the pattern for all that followed. In May 1919 he declared Sulaymaniya independent and the British sent a military force to subdue him. He was eventually arrested, then released, then rose up again, then defeated, then made a deal with the government, only to lead another revolt. Sheikh Ahmed Barzani and then his brother Mulla Mustafa Barzani who started fighting the Iraqi government in the 1930s and 40s followed the exact same pattern. Mustafa Barzani would become the main Kurdish leader and moved from wanting more power for his tribe to eventually demanding Kurdish autonomy. The Iraqi government would offer terms, but never follow through and then eventually try to use the army and air force to put him down. It constantly failed because it could never penetrate the mountains the Kurds retreated to. Then winter would set in, military operations would cease, the Kurds would pick up their raids and then talks would usually begin the next year only to deteriorate and fighting return. Baghdad would constantly recruit lowland and urban Kurds and rival tribes to fight against Barzani. Eventually some intellectuals would form the Kurdistan Democratic Party (KDP) who accepted Barzani because he was the most popular Kurdish leader in Iraq, but neither side trusted each other. At one point in 1964 Barzani kicked the KDP leadership out of Iraq and forced them into exile in Iran and then seized control of the party. That would eventually lead one of the KDP heads Jalal Talabani to form his own armed force which aligned with the government and fought against Barzani. O’Ballance points out the Kurds also never tried to internationalize their struggle to get either the West, the Soviet Union or the media to champion them which could have changed the entire dynamic. The book provides plenty of details of all of these turn of events and laments how noting ever seemed to change. Baghdad never had the military force to defeat the Kurds, was never serious about making any concessions and Barzani could never move out of the mountains and often seemed reluctant to do so. The author couldn’t understand why each side seemed content to be deadlocked for decades. Both proved incapable of learning from the past.

Despite the book being written in 1973 it is still an excellent history. It does a great job breaking down the Iraqi government and Kurdish sides and their confrontations. It also looks at the wider context of the Kurds across the region. His argument of the inability of the two sides to change their approach is convincing and quite amazing at the same time. In the 50 years covered in The Kurdish Revolt 1961-1970 history would repeat itself again and again.