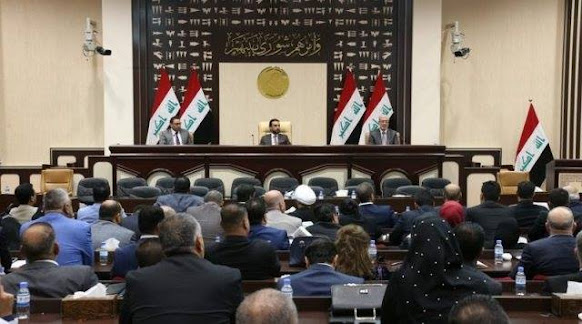 (Buratha News)
In October, the Kazemi government asked parliament to pass a second borrowing bill to cover its growing budget deficit. Initially the lawmakers were opposed to the request arguing that a growing debt was a threat to the economy as well as not believing the government’s dire situation. In November, lawmakers finally agreed on a revised version of the law that would greatly reduce the amount of money the authorities could ask for. The MPs also added an amendments demanding the Kurdistan Regional Government (KRG) turn over almost all of its revenue in order to receive any of the borrowed funds.

Iraq is facing the dual blows of an oil war between Saudi Arabia and Russia which collapsed prices and then the COVID-19 pandemic which destroyed demand. As the most oil dependent country in the world Iraq quickly found that it could not cover its growing budget. It has therefore asked for more and more loans.

In June parliament authorized the government to borrow 15 trillion dinars ($12.6 billion) from Iraqi banks to cover its deficit but failed to raise $5 billion in loans from foreign sources. When Baghdad used up all that money it asked to borrow 41.6 trillion dinars ($35.2 billion) more in October. MPs on the finance committee immediately voiced objections saying that the government could pay public salaries, that the numbers it was presenting were inconsistent and worried about a growing debt. In November parliament agreed to allow Baghdad only 12 trillion dinars ($10.2 billion) in loans. This was obviously only a fraction of what the government needed. It raised the fact that many of the ruling parties don’t believe Iraq is in such a bad situation and that oil prices will soon recover and the country will be out of its problem. That is unlikely to happen meaning that Prime Minister Kazemi will come back to parliament very soon asking for a third series of loans.

The law was also passed over the objections of the Kurds. Some MPs amended it to include the KRG turn over all of its oil and half of its customs revenues in order to receive any of the 12 trillion dinars the government will borrow. This was obviously rejected by the main Kurdish parties who boycotted the session. Many of the Shiite lists are mad that the KRG has been receiving money from Baghdad and not given anything in return. PM Kazemi for instance made a deal to deliver 320 billion dinars a month to help cover Kurdistan’s public workers. The KRG was supposed to send part of its tariffs in return but hasn’t. This has been going on for quite some time now. Since Baghdad hasn’t significantly punished the Kurds for their transgression they believe they can continue to fail to live up to their side of agreements and the central government will keep sending them money.

Buratha News, “Parliamentary source: The lack of a quorum for today’s session due to the boycott of Kurdish representatives,” 11/11/20

Middle East Monitor, “Iraq’s inability to borrow money has ‘plunged it into crisis,’” 9/17/20