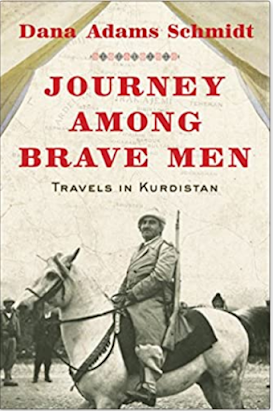 Journey Among Brave Men, Travels in Kurdistan was written by New York Times reporter Dana Adams Schmidt. It was based upon the author’s three month trip into Iraqi Kurdistan in 1962 with follow up visits in 1963. While there Schmidt got to interview the Kurdish leader Mullah Mustafa Barzani several times and was impressed by his determination while also noting some of his faults. Schmidt was taken in by his Kurdish guests and gushed about their hospitality and culture. That led him to exaggerate their fighting prowess sometimes, but again remarked on how the struggle with the Iraqi government was stalemated although the author hoped that Barzani would eventually prevail.

One of the main takeaways from the book was that the Iraqi government was never serious about offering concessions to the Kurds. General Abd al-Karim Qasim who took power in 1958, the Baathists and Colonel Abdul Salam Arif who overthrew Qasim in 1963 all offered the Kurds cultural rights, appointing Kurdish officials and a semblance of decentralization but never followed through. No matter who was in office they always talked about Kurdish autonomy but was never serious and yet Barzani always met with them. The author wasn’t aware of this pattern but documented how Qasim, the Baath and Arif all did the same thing.

The second main point was how the war between Barzani and the central government was stalemated. The government controlled the lowlands and major towns and cities and the Kurds were in the mountains. Barzani’s forces could ambush Iraqi forces when they tried to venture into the hills but there was no way either side could win. Schmidt notes this several ways such as the Kurds always having to hide from the Iraqi Air Force, keeping most of their large movements to the night as a result, the remote areas the Kurds congregated in, and Barzani saying they would never take any towns because they could never hold them. The author hoped that the Kurds would eventually win by wearing down the government, but that seemed to be based upon his admiration for the Kurds more than an evaluation of the political and military situation. For example he claimed that the Kurds were some of the best guerrilla fighters in the world and that they were good at ambushes but then said they spent most of the time hiding and that they would never hold any territory outside the mountains.

Another issue was how divided the Kurds were. In 1961 for instance, Barzani decided to lead another revolt this time against General Qasim. The first thing he did was attack all the Kurdish tribes that were aligned with Baghdad driving some into Turkey and burning and destroying the villages of others. Barzani was also the nominal head of the Kurdistan Democratic Party (KDP) but Barzani was a tribal leader relying upon other sheikhs while the KDP were urban intellectuals. Besides the Kurdish cause they actually had little in common and Barzani often criticized the KDP as do nothings. Even when they made an accomplishment like talking to Egypt’s Gamal Abdel Nasser which was the first time the Kurdish issue was discussed in the larger Arab world Barzani thought it was a total waste of time. Barzani was undoubtedly the most popular Kurdish leader in Iraq, but he wasn’t the only one. He constantly had to face rival tribes and the KDP was trying to build its base separate from his. Schmidt thought that Barzani was smart but not sophisticated. For instance he didn’t always understand politics and sometimes even dismissed it.

Journey Among Brave Men is part travel journal through Iraqi Kurdistan part political commentary. A lot of the book is about Schmidt going up and down the mountains and his struggles to adapt to his surroundings. In between that there are some interesting observations on Barazani’s struggle for autonomy in the early 1960s. There’s the unwillingness of the Iraqi government to make serious concessions. The inability of either the army or Kurds to make any headway against each other. Barzani’s leadership is highlighted but he always dealt with rivals even with his nominal allies the KDP. The result was the Kurds were stuck in a pattern of fighting and then going into talks but getting nothing out of them and then going back to fighting only to be offered more discussions that were never sincere. When the book came out Barzani had already been in his struggle for 30 years and yet didn’t seem to know how to change the dynamic within Iraq. That’s ultimately what you come away with from this book despite all the positives the author stressed.