2017 saw a steady decline in violence in Iraq. After the Mosul battle concluded at the start of the year, security incidents and casualties both went down reaching significant lows not seen since 2003. This was due to the defeat of the Islamic State as a conventional army and the last sections of the country being freed, and a decision by the militants by the end of the year to give up fighting and withdraw.

At the start of 2017 the Battle of Mosul was still going on leading to an average of around 20 incidents per day from January to March. As the fighting closed there, incidents dropped from 19.2 incident per day in April down to 10.2 by September. By the winter, during which the insurgents have traditionally not launched as many attacks incidents dropped down to just 8.4 per day by December. Another mitigating factor was that the Islamic State decided not to fight the Iraqi forces anymore by the end of the year because they suffered too many losses and were regrouping. 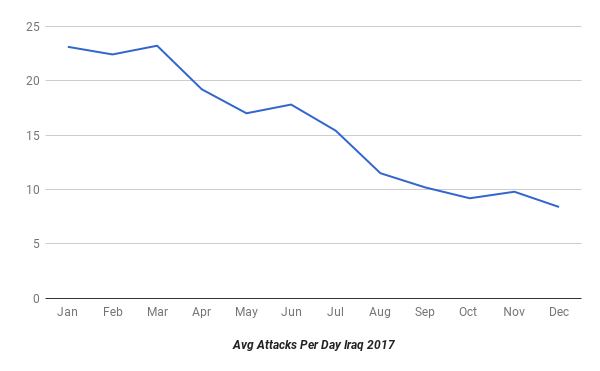 In total, there were 5,693 security incidents in Iraq during the year. That led to 22,644 deaths made up of 2 US Soldiers, 2 members of the Iranian Revolutionary Guard (PAK), 2 members of the Kurdistan Freedom Party, 3 Asayesh, 23 Turkish Soldiers, 35 Sahwa, 58 members of the Iraqi Security Forces (ISF) and Hashd, 257 Peshmerga, 318 members of the Kurdistan Workers Party (PKK), 738 Hashd al-Shaabi, 1,934 ISF, and 19,272 civilians. There were another 18,256 wounded consisting of 1 Coalition soldier, 3 US Soldiers, 3 PAK, 17 Sahwa, 23 Turkish soldiers, 511 Peshmerga, 785 Hashd, 2,372 ISF, and 14,541 civilians. The fact that the number of dead and wounded were almost even was another sign of the problems with casualty reporting in Iraq. The latter should be anywhere from 3-6 times as high as the number of fatalities. There were another 677 deaths and 6,936 wounded from the Battle of Mosul that stretched across 2017-18.

The Islamic State maintained control of western Anbar until the end of the year. When the government finally freed those areas the insurgents barely put up a fight deciding to withdraw and reserve its manpower instead. Before that, IS was not carrying out many operations in the province with only around 1 incident per day for most of the year. It would launch a large number of suicide and car bombs however. During January, July and October there were over 40 such attempts each month. Only October coincided with a military offensive by the government, which usually results in a large number of counter attacks using such devices. In comparison, when the campaign to free west Anbar was completed in November and December there were only 14 and 6 such attempts respectively, again highlighting the shift in tactics by the insurgents. 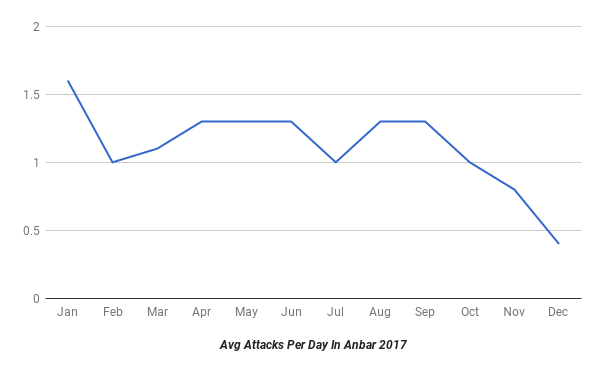 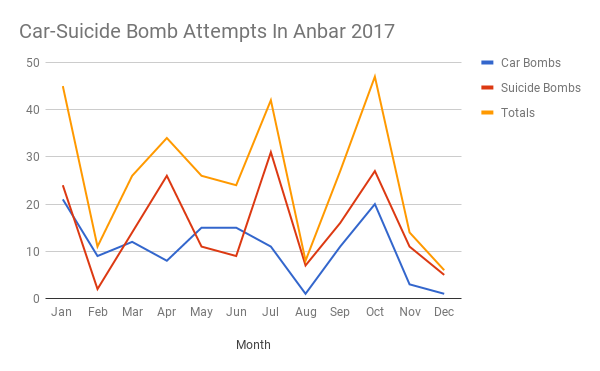 Baghdad province was the posterchild for the change in security in Iraq. It was once the main focus of terrorist attacks, but there was a huge decline in violence from January when there was an average of 5.9 incidents per day down to just 2.1 by December. Like Anbar, that change was also seen in the attempts at mass casualty bombings. For most of the year IS launched a steady diet of car and suicide bombers, but that changed in the fall into the end of the year. From January to August, there was an average of 13.1 of those types of attacks launched per month. That went down to 3.0 in the last four months of the year. Again, with the Islamic State rebuilding its operations declined. The Baghdad Operations Command also focused upon the rural areas around the city also contributing to a drop in insurgent attacks. Baghdad has always been a bell weather of insurgent activity. The number of monthly incidents needs to be watched closely in the coming year to see what happens to the Islamic State. 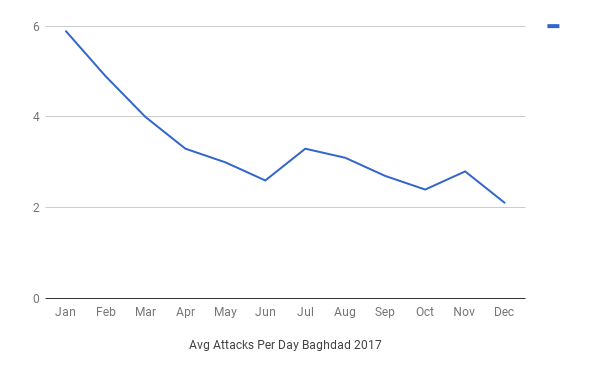 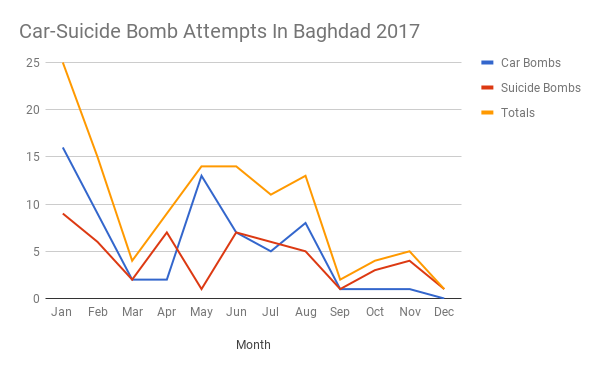 Diyala is one of the main provinces where IS has fallen back to. During the summer, it carried out a mini-offensive where incidents went from an average of 1 in March up to 2 by June. The number of car and suicide bomb attempts also peaked during that period with 12 in May and 11 in June. Attacks fell afterward. Still, local officials are constantly complaining that militants are operating in rural areas and moving back and forth between neighboring provinces such as Kirkuk and Salahaddin. 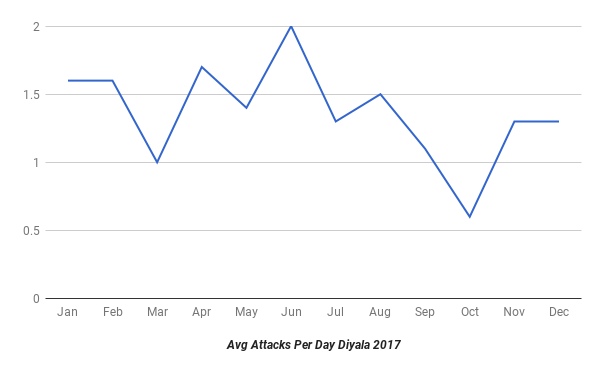 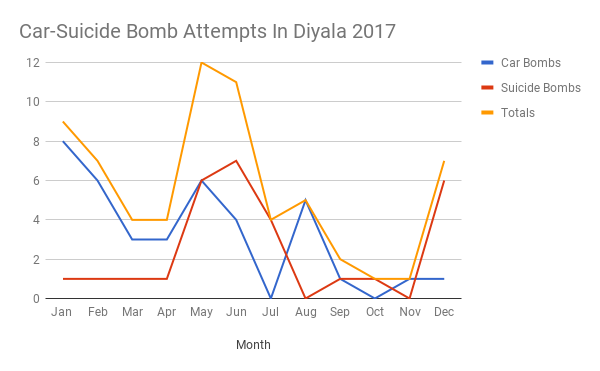 The Hawija district was freed, one of the last bastions the Islamic State held in Iraq, yet Kirkuk was the only province in the country where incidents went up in 2017. At the start of the year there were just under 1 incident per day. By the last three months, there were just over 1 incident per day. The change was due to Prime Minister Haidar Abadi sending in the federal forces to take over the governorate from the Kurds. That led to a relative level of instability with a mix of political and insurgent violence with political parties being targeted almost as much as civilians. 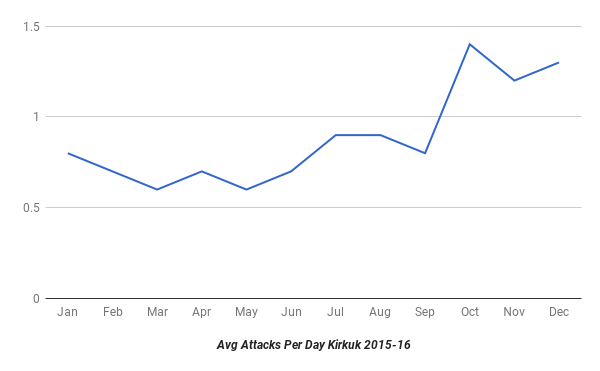 The Battle of Mosul shaped security in Ninewa during the first half of the year. There were over 10 incidents per day for the first four months of the year, then there was a dramatic drop starting in June before things levelled off. IS then switched to an insurgency and is still active in the west along the Syrian border, the south and inside Mosul. 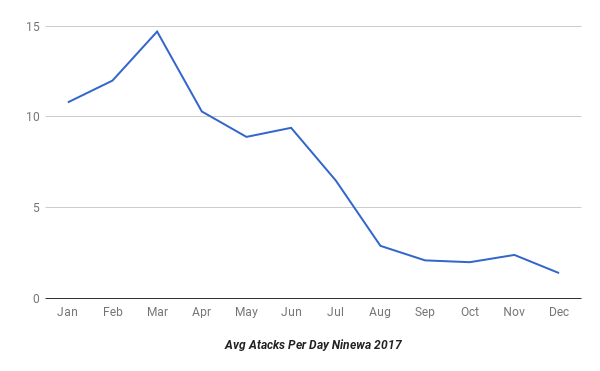 Salahddin followed a similar pattern to Diyala as it is one of the places where the insurgents are rebuilding. The number of incidents remained flat for most of the year with just around 1 incident per day from January to September. It was only in the last three months that the average dropped below 1 per day. That was due to a mix of the northern section of the province finally being freed from the Islamic State, and the group withdrawing rather than fighting. Throughout the year, the militants did maintain a large number suicide and car bombs. Those attempts would ebbed and flowed, but the numbers were some of the highest of any province. In January for instance, there were 27 attempts. That dropped to 5 in March before going up to a yearly high of 59 in April, down to 8 in May, and then increased to 38 in June. Like incidents, these bombings went down at the end of the year with 21 in October, 18 in November, and 3 in December. 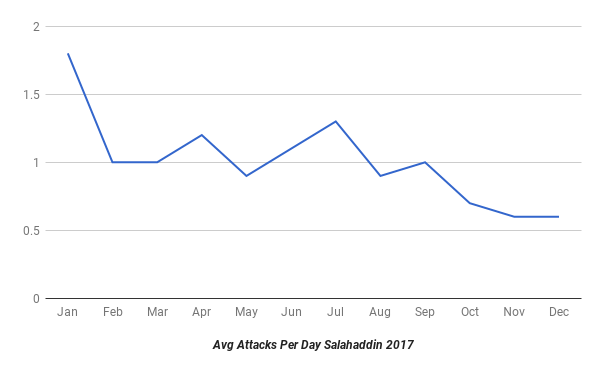 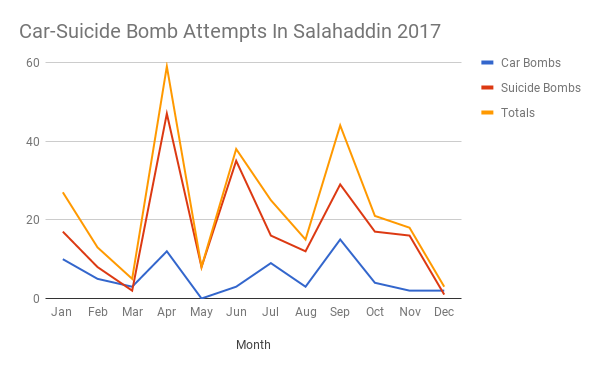