How England Chose Feisal As 1st King Of Iraq

England ended World War I in control of three former Ottoman vilayets or provinces, Basra, Baghdad and Mosul, also known as Mesopotamia. What to do with the three vilayets became a top priority for London. Winston Churchill who was Secretary of War at the time and later Colonial Secretary was most concerned with cutting costs for Britain after the war. Throughout the year, he continuously wrote Prime Minister Lloyd George about how much England was wasting in Mesopotamia. He even lobbied to give up Mosul and Baghdad and just keep Basra for the money it could save. In 1921, Churchill and his advisers decided to form a government led by Feisal bin Hussein that would run the new country of Iraq, and thus save England from those expenses, while creating a regime dependent upon London. 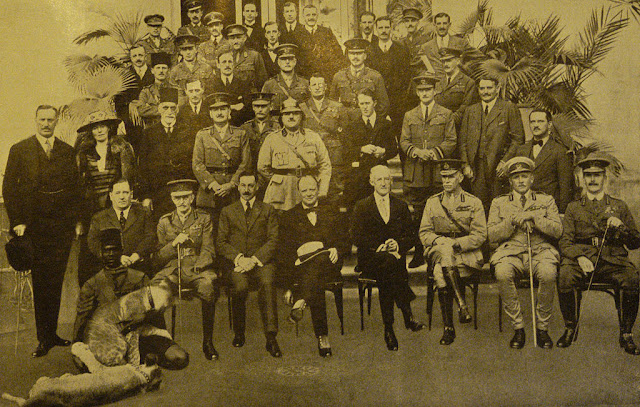 
The idea of Feisal becoming king of Iraq was first brought up by British officials in 1920. In November, Foreign Minister Lord Curzon invited Feisal to London for talks about possibly becoming king in Mesopotamia. T.E. Lawrence who knew Feisal from the Arab Revolt during World War I said he was interested in the position, although he still had claims to Syria. The British consulted with the French who were their wartime allies. Paris was opposed to Feisal because he led a revolt against them in Syria and considered him a troublemaker. Feisal’s dad Hussein Ibn Ali King of the Hijaz and Sharif of Mecca told him to turn down the job so that his brother Abdullah could take over in Mesopotamia. Churchill, who became Colonial Secretary in 1921 took those opinions into account, but decided England would have the final say as it controlled the area.

In March 1921, Churchill called a conference in Cairo to decide the future of Mesopotamia. Most the officials who attended including Sir Percy Cox, Lawrence, and Gertrude Bell, all endorsed Feisal. Lawrence for example, felt that the British had experience with him from the war and that could be used to create an army to defend Mesopotamia so the British wouldn’t have to. Being a member of the Hashemite family, which descended from the Prophet Mohammed would also give him standing with the locals. Churchill believed that London could put Feisal on the throne in a new Iraq, Transjordan would be created with Abdullah as king there, and with their father Hussein receiving subsidies they could all ensure British power in the region. It was then decided that Feisal would be the new ruler.

The next issue was how to put Feisal on the throne of Iraq when he was not indigenous to the country. It was decided that Feisal would offer his services to Mesopotamia. Churchill argued that with the full backing of England, the locals could not say no. Then an Anglo-Iraq Treaty would be drafted to ensure relations between London and Baghdad, and a constitution would be drafted to set up the new government. On March 22, 1921, PM George and his cabinet accepted Feisal. Sir Percy Cox the British High Commissioner for Iraq then exiled two Iraqis who wanted to be king, thus eliminating the competition. Feisal was a bit reluctant at first to assume the position, but when the British said he could bring the Iraqi officers that supported him in Syria with him to Iraq he agreed. Cox held a referendum in Iraq claiming 96% of the participants picked Feisal, and he was coroneted in August. This was a fait accompli as England, the imperial power, made all the decisions. Its main motivation was not to ask what the local Arabs wanted, but rather to create a way to run Iraq on the cheap.

Churchill was not really interested in holding anything but Basra after World War I, but Prime Minister George did not want to give up the spoils of the war. With that in mind, Churchill worked out a plan to put Feisal on top of a new government that would run Iraq for the British. Feisal however, proved anything but a puppet. He immediately caused headaches demanding complete sovereignty for Iraq. That didn’t happen, but it showed that he had his own agency and would not do as Britain said. Still, the English would remain the dominant power through the Anglo-Iraq treaties until the system they created was wiped clean by the 1958 coup.