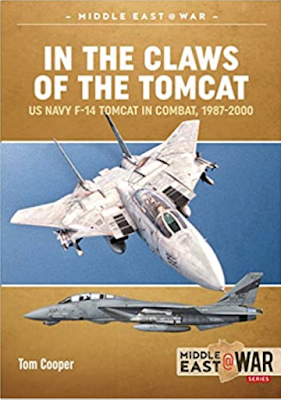 In The Claws Of The Tomcat: US Navy F-14 Tomcats In Air Combat Against Iran and Iraq by Tom Cooper is a military history about the development and deployment of the F-14 jet fighter during the Iran-Iraq War, the Gulf War and the No Fly Zones over Iraq in the 1990s. It starts with Soviet and U.S. military doctrine during the Cold War which shaped the development of the F-14 and its MiG counterparts. It then covers the U.S. navy deploying to the Persian Gulf during the Iran-Iraq War which led to a brief confrontation between American and Iranian F-14s. Most of the book however is on the Gulf War with Cooper providing an account from both sides as he has spent extensive time studying the Iraqi Air Force. The conflict was a what if event as there were few actual run ins between Iraqi MiGs and F-14s. The author explains how this was the result of U.S. strategy and Iraqi air command.

Going over Soviet and American Cold War military strategy doesn’t seem relevant at first, but it explains how and why the planes of the two superpowers were developed that would later see action against each other in the Middle East. The F-14 was built as the main interceptor for the U.S. Navy but was cancelled by Congress in 1974 only to be saved by an export deal to Iran. Its main duty was to escort electronic jamming planes and fighter bombers to their targets and not chase after Soviet planes. That would shape its use during the Gulf War. The USSR on the other hand believed it would be surrounded by American carrier groups and face bombers and jets coming from all directions. It wanted to develop the fastest jets to eliminate as many U.S. planes as quickly as possible. Its problem was that it lacked the technology to match its American counterparts. That led to the MiG-23 which was considered a disappointment for its insufficient weapons system, its lack of maneuverability and poor quality but was put into service because of leadership. The MiG-25 was a high-altitude interceptor meant to take on bombers not other fighters. Both were designed to be directed to a target by ground systems and launch their missiles from a distance. The MiG-29 was a dog fighter but had lots of early problems as well. The Iraqis were armed with all three along with older MiG-21s. They used the same Soviet system of ground controllers directing the fighters and developed special tactics to deal with the F-14s during the Iran-Iraq War. Cooper writes that Western accounts generally denigrate the Iraqis as bad pilots that always ran, but he argues that they were in fact more experienced than the Navy pilots and a dangerous foe. This background also proved important because it shaped how the two sides fought each other during the Gulf War.

The heart of In The Claws Of The Tomcat details the U.S.-Iraq conflict with perspectives from the two sides. The Iraqis scored the first kill downing an F-14 on January 17, 1991. The MiG could’ve engaged more targets but was ordered home by ground control. Again, Iraqis were trained in Soviet tactics where the command centers directed all the planes. That same day there were several other encounters between the two sides that led to the downing of several MiGs. Many times the Iraqis retreated when they found they were being tagged by U.S. radar. American doctrine would not let the F-14s pursue them out of fear that it would leave the more vulnerable planes open to attack. The Iraqis changed their tactics several times such as trying to draw the U.S. into missile batteries which led to the downing of one F-14. Overall, the Iraqis suffered far higher losses in the air. Cooper’s book shows that they were not a weak opponent. They challenged the Americans, tried to adapt to the situation but were simply overwhelmed by the number of sorites the Coalition made and their superior technology. If U.S. policy had allowed the F-14s to pursue the MiGs they would have also been able to destroy far more planes.

The one drawback of the book is the constant use of military abbreviations. There’s an index at the front with the meanings of some but not all of them. Especially when Cooper is describing a unit of American planes it’s just one abbreviation after another for not only the types of jets used but also their various equipment. A reader can easily get lost in them.

Overall, Tom Cooper’s book was a good military history. It starts off with the Soviet and American doctrines that would shape the Gulf War, how that led to the different types of planes and how they were used during the conflict. The fact that Cooper had extensive knowledge of the Iraqi Air Force also provides one of the first accounts in English about how it saw things. Besides that, In The Claws Of The Tomcat also has chapters on the Americans confronting the Iranians and the Iraqi challenges to the No Fly Zones over the northern and southern sections of their country in the 1990s. There are lot of pictures, maps and line drawings of the jets as well.