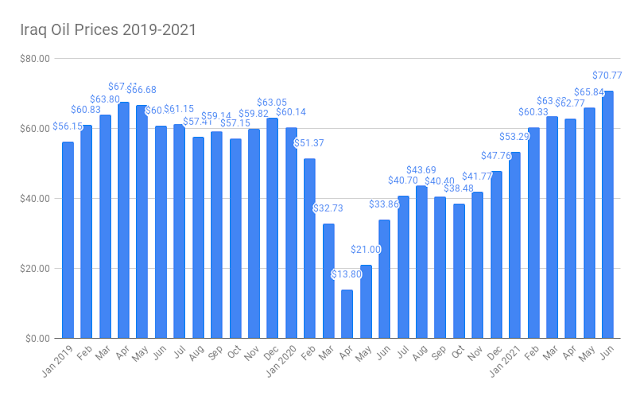 Iraq’s government revenues continued to rise in June 2021. That was due to prices passing $70 per barrel as the energy market continued to recover after COVID and the Russian-Saudi price war that sent petroleum into a tailspin last year.

Iraq exported an average of 2.892 million barrels a day in June. That was almost the same as May’s 2.899 million. The previous three months however the country was selling over 2.9 million barrels a month. Petroleum production has gone up and down each month which affects exports. Output is still far higher than it is supposed to be under OPEC+ quotas but Iraq has never followed them because it is the most oil dependent country in the world and needed to raise money while the energy market collapsed in 2020.

Now that oil is recovering Iraq is reaping the benefits. A barrel of its petroleum sold for $70.77 in June. That was the highest price since October 2018. Profits increased as well to $6.141 billion, the most since January 2020. The prime minister’s financial adviser said that Iraq no longer has to borrow and its huge budget deficit can now be covered due to rising oil prices. That is great news for Baghdad that passed the largest spending bill ever with a record deficit as well.

Al Mada, “Governmental Adviser: The surplus of oil revenues will cover the deficit and cancel borrowing,” 5/25/21