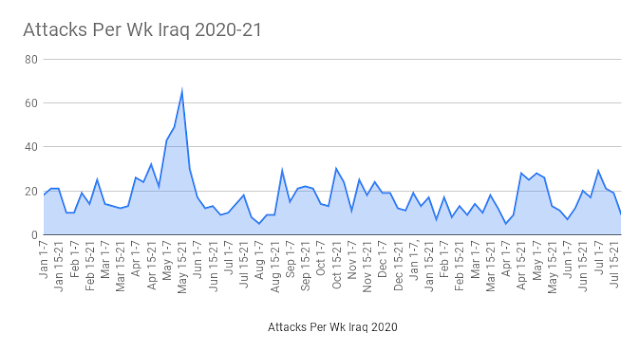 Violence in Iraq dropped for a third straight week. There were just 10 total security incidents reported in the country from July 22-28. That was down from 20 the week before, 25 the second week of July and 38 the first week. Both the Islamic State and pro-Iran groups have been winding down at the end of July. This is the normal ebb and flow of attacks in the country. From April to May there was a similar spike. 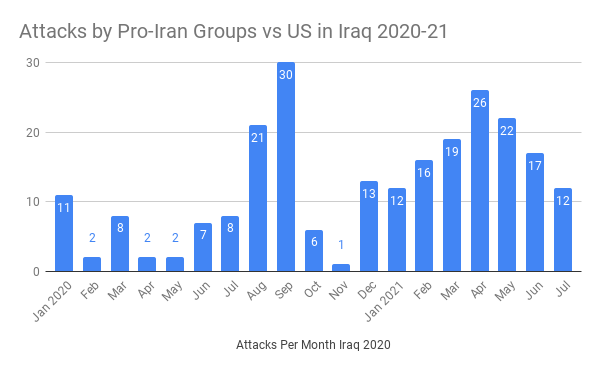 There was just one incident by the pro-Iran factions. They hit a military base in Irbil province with a drone. This was the second drone attack of the month and the 12th overall incident by these groups in July.

There were 9 incidents by the Islamic State during the fourth week of July. It was responsible for 11 incidents the week before, 21 the week before that, and 29 the first week of the month.

Those left 10 dead and 7 wounded. 1 Hashd al-Shaabi, 3 members of the Iraqi Security Forces (ISF), and 6 civilians were killed and 2 civilians and 5 ISF were injured.

There was a spike in attacks in Anbar and Ninewa at the start of the month but that’s now over. A military camp was attacked in the Rutba district of Anbar that left 1 Hashd and 2 soldiers dead and 2 soldiers wounded. IS rarely carries out such bold attacks in the province because it’s just used for logistics. In Ninewa there was a shooting in the south that left 2 civilian casualties.

A man was gunned down in the northern district of Tarmiya in Baghdad province. IS has reactivated its cell in this area and usually carries out at least one attack per week there now.

Diyala and Kirkuk had 3 incidents each. There were three shootings and a kidnapping all in Diyala’s Muqdadiya district in the center. The governorate has been relatively quiet compared to previous months. A police checkpoint was hit and two towns were rocketed in Kirkuk. In both provinces IS appears to be rebuilding its cadres and harassing locals and the security forces that venture into its territory.

NINA, "4 Federal Policemen Martyred And Injured In An ISIS Attack South Of Kirkuk," 7/24/21

- "One Civilian Killed, Another Wounded, And A Third Kidnapped In One Of Diyala's Districts," 7/24/21

- "One civilian was killed and another one wounded in an armed attack south of Mosul," 7/23/21

Al Sumaria, "One person was killed in an armed attack on a house north of Baghdad," 7/28/2