Review Iraq in Fragments, The Occupation and Its Legacy 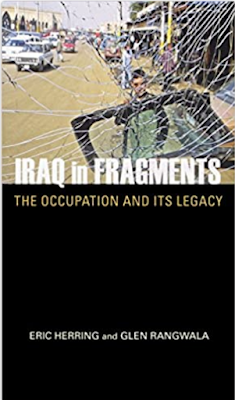 The thesis of Iraq in Fragments, The Occupation and Its Legacy by Eric Herring and Glen Rangwala is that the United States failed to create a successful state after the 2003 invasion. The book is divided into three broad sections. First is the politics of the U.S. occupation, then security and finally the economic changes the Americans attempted. The first part is good and has some interesting takes on why the Iraqi ruling parties are not responsive to the public. After that however it runs into more and more problems as it makes assertions about things that never happened. It makes the last two-thirds of the book a bit of a mess.

The book begins by arguing that the Americans failed to build a legitimate state in the eyes of the Iraqis. The authors consider this through many lenses. For instance the U.S. did not provide adequate services such as clean water and electricity which made the public distrust the American effort. Most of its allies were exile groups which had no popular support within the country. They gained their power through their alliance with the U.S. instead. When they took control of ministries they created patronage networks which used state resources for their own goals. That made people loyal to the parties rather than the state. In 2005 they organized along ethnosectarian lines during the first two elections in 2005 and did not really have to compete for votes as a result. The major Shiite parties formed the United Iraqi Alliance that had the backing of the country’s leading cleric Ayatollah Ali al-Sistani and won 70-80% of the vote in the mostly Shiite south. Likewise the two main Kurdish parties who’d ruled Kurdistan since the 1990s created one list and won 80-90% of the ballots. They then formed governments by making deals amongst themselves. Herring and Rangwala have plenty of other examples but they make a good point that the Americans didn’t win much support for their policies because they failed at the basics such as services. They relied upon Iraqi allies that never really created mass popular bases and used the state’s wealth for their benefit. None of this created a government with legitimacy.

After that interesting start the authors start spiraling downwards. The next two sections on security and economics are marred by a large number of faulty assumptions. For instance, Herring and Rangwala write that U.S. counterinsurgency strategy was based upon a new manual. In fact, the manual was never followed during the start of the occupation. Then the authors claim that the Americans carried out neoliberal economic reforms that set the stage for privatization, domination of U.S. companies and foreign investment. The book talks about the oil industry, which was never privatized, while few international companies entered Iraq because it was considered unstable. There are more problematic parts like that. Too many times the book takes U.S. statements at face value and doesn’t explain whether they were successfully carried out or not. The Americans might have wanted to create a free market economy in Iraq but they never came close to achieving it. The authors miss that important part.

Overall, Iraq in Fragments suffers from bad scholarship. The United States made tons of mistakes in Iraq especially early on. Herring and Rangwala couldn’t just stick to them but had to assert events that didn’t occur like the U.S. following its counterinsurgency manual or privatizing the Iraqi economy. The section on America’s political strategy and the new Iraqi elite is still very interesting. The book however just has too many problems.