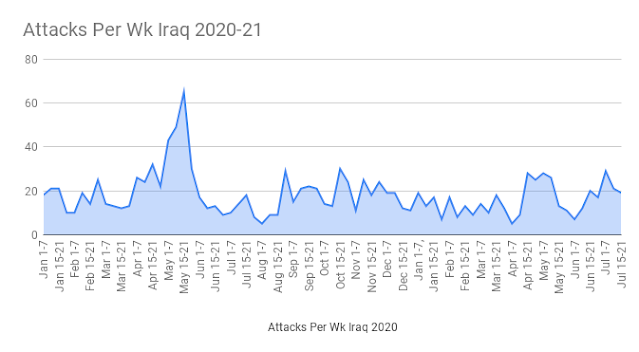 Violence in Iraq declined for the second week. Incidents by both the Islamic State and pro-Iran groups went down during the third week of July 2021. The insurgents were able to launch a mass casualty bombing in Baghdad however.

There were a total of 20 security incidents recorded in Iraq from July 15-21. 1 was by pro-Iran factions with the other 19 by the Islamic State. That was down from 25 the week before and 38 the first week of the month. 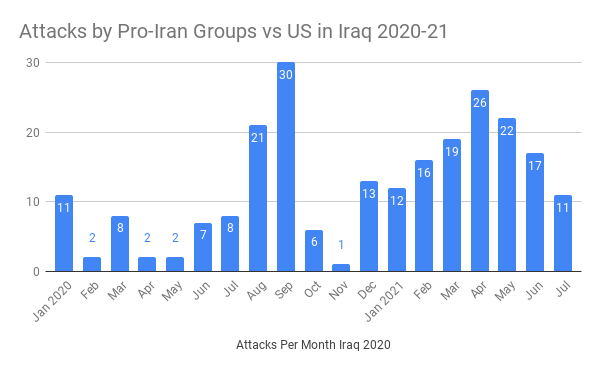 Incidents by groups working with Iran went from 9 the first week of July to 4 the second and just 1 the third week. An IED hit a supply convoy working for the U.S. in Dhi Qar on July 15. These factions have been increasing their rhetoric against the American presence in Iraq, but their attacks have gone down during the same period. There have been a total of 11 incidents by these factions in July.

The week’s attacks resulted in 48 dead and 75 wounded. 1 Hashd al-Shaabi, 8 members of the security forces (ISF) and 39 civilians were killed while 2 Hashd, 7 ISF and 66 civilians were injured. Baghdad had the most casualties with 96. This was the most weekly casualties since the third week of January.

Anbar and Ninewa are logistics hubs for the insurgency. They usually only see a few incidents per month but that has changed in July. Anbar had four attacks this week that included a gun battle and a power tower blown up in IS’s campaign against the electricity grid during the summer. Ninewa saw one IED and another dismantled by a power tower.

Baghdad saw 3 incidents including a suicide bombing at a market in Sadr City that left 35 dead and 59 wounded. It was the second deadliest incident in the capital this year. The worst was when two suicide bombers hit the center of the city on January 21 killing 32 and injuring another 110. There were also two shootings that left 2 ISF members dead. IS has a cell operating in the Tarmiya district in the northern section of the governorate. Now it might be restarting in the south as well. Overall, it appears that IS is launching a new attempt to infiltrate the province and hit the center of the city.

Babil is a target of opportunity for the Islamic State. It almost always hits the Jurf al-Sakhr district in the northeast which is a large Kataib Hezbollah base with army units stationed around it. During the third week of July there was an IED that wounded 2 Hashd and two infiltration attempts.

In the Makhmour area of southern Irbil the insurgents captured a tribal Hashd member and executed him. This part of the province has seen sporadic attacks throughout the year.

There was a spike in violence in Kirkuk and Salahaddin at the start of the month which has since ended. There were just two shootings in Kirkuk during the week, but one was an assault upon an Army camp in the Dibs district that killed 4 soldiers. A similar incident occurred in Salahaddin that left 2 army fatalities and 3 injured. IS has camps in southern Kirkuk and southeast Salahaddin but is concentrating on rebuilding its cadres rather than carrying out violence in the two governorates.

Diyala is the heart of the Islamic State in Iraq. There were two shootings and an ISF member had his house bombed. One incident was in the Khanaqin district in the northeast and the other two in Muqdadiya in the center. These are the main areas IS has asserted control of since its defeat in 2017.

Iraq Newspaper, "Execution of a member of the tribal mobilization after his capture by the Daesh terrorists in the village of Shayala Al-Abli, west of Makhmour," 7/15/21

- "Targeting a house of a security element with an explosive device in Diyala," 7/21/21

- "Three civilians were killed and injured in an armed attack north of Kirkuk," 7/16/21

- "Three soldiers were wounded in an ISIS attack northeast of Baquba," 7/18/21

- "Two civilians were injured when an explosive device left behind by ISIS exploded south of Mosul," 7/18/21

Shafaq News, "'Violent' clashes between ISIS and the crowd in Anbar, and the latter wins," 7/17/21

Al Sumaria, "An explosive device targets a convoy of the International Coalition in Nasiriya," 7/15/21

- "Thwarting the bombing of one of the power transmission towers in Ninewa," 7/18/21