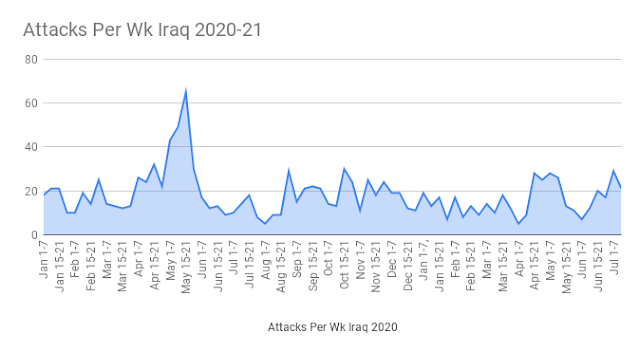 Violence in Iraq constantly ebbs and flows. The second week of July 2021 was one week where security incidents went down. Both the Islamic State and pro-Iran groups carried out fewer operations then the week before. 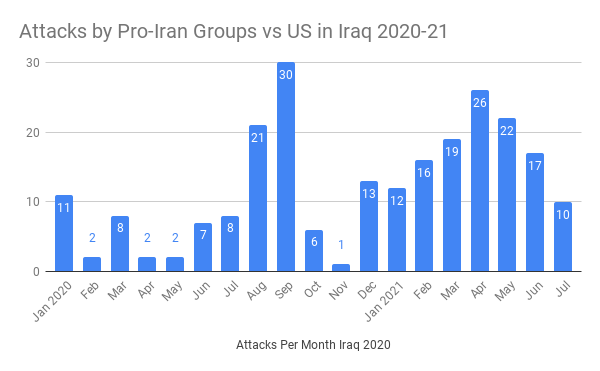 Groups tied to Iran hit convoys working for the U.S. with IEDs in Anbar, Basra and Diwaniya. They also fired rockets at Baghdad’s Green Zone. There have been a total of 10 attacks by these factions in July with 2 others thwarted.

They left 7 dead and 17 wounded. 2 civilians and 5 members of the Iraqi Security Forces (ISF) were killed and 4 civilians, 5 ISF and 8 Hashd al-Shaabi were injured. Ninewa had the most casualties with 10.

The Islamic State continued its campaign against Iraq’s electricity network. Power towers were bombed in Baghdad and Diyala. Repair workers were hit with an explosive in Salahaddin and IEDs were also dismantled in Baghdad, Diyala, Ninewa, and Salahaddin targeting the electricity infrastructure. This is meant to undermine the government during the summer heat.

Anbar and Ninewa are used for logistics by IS and usually have few incidents. In Anbar 4 trucks were burned in the Rutba district. In Ninewa there was a shooting and two IEDs all in the south. One bomb hit a group of Hashd wounding 8.

Two police were killed in northern Baghdad province. IS has reactivated its cell in Tarmiya in that area and is carrying out regular attacks there now.

There was a shootout with insurgents in northern Diyala and a sticky bomb targeted in mukhtar in the Baquba district. This is the heart of the Islamic State in Iraq but there have been few attacks there the last few weeks. The group is expanding out to the northeast along the Salahaddin border.

Violence in Kirkuk and Salahaddin were about the same as the last week. There were three shootings in southern Kirkuk which left 3 police dead and 5 wounded. A kidnapping also occurred. In Salahaddin there was an infiltration attempt in the Tuz Kharmato district in the east and a mukhtar’s house was shot up in the Samarra district in the center. IS has major bases in both provinces but attacks wildly fluctuate. It appears the group is focusing upon rebuilding in the two governorates more than carrying out operations.

Finally, in Irbil the insurgents released a man they kidnapped after a ransom was paid. This remains one of the main ways the Islamic State raises money within the country.

Iraq Newspaper, "A logistical support convoy belonging to the American coalition was targeted with an explosive device in Diwaniya, southern Iraq," 7/11/21

- "An Attempt To Bomb One Of The Main Towers Linking Baghdad And Al-Quds Electricity Station Thwarted," 7/13/21

- "A Civilian Injured In An Explosive Device Explosion South Of Mosul," 7/12/21

- "A Convoy Of Logistical Support For The Int'l Coalition Targeted With An IED In Basra," 7/11/21

- "Thwarting an attempt to blow up a tower to transmit electric power in Diyala," 7/11/21

- "ISIS elements in military uniform kill the son of the mayor of a village south of Mosul," 7/13/21

- "ISIS targets shepherds in western Anbar and a military directive to evacuate the grazing areas," 7/14/21

Sotaliraq, "A martyr and wounded in an armed attack targeting the house of a mukhtar of the Abbasiya area west of Samarra," 7/9/21

- "Two attempts to blow up electric power towers in Ninewa and Diyala thwarted," 7/11/21