Review The Triumph of the Martyrs, A Reporter’s Journey into Occupied Iraq 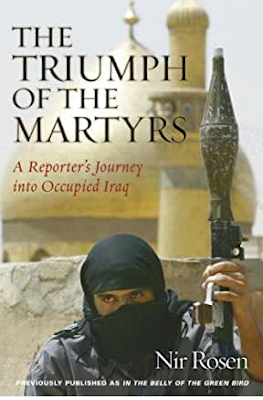 The Triumph of the Martyrs, A Reporter’s Journey into Occupied Iraq by Nir Rosen tries to explain the fracturing of Iraq during the first two years of the U.S. occupation. Journalist Rosen spent most of his time in the country talking with Iraqis from all different groups from Sunni and Shiite clerics to members of the Kurdish parties to Turkmen to insurgent groups. He found during the first few months after the invasion Arab Iraqis were united in their opposition to the Americans but this quickly came apart. That was replaced by communal demands for power and violence by insurgents and militias. Rosen’s argument is that the Bush administration came to Iraq claiming it was going to bring democracy but instead it spit the nation.

During the first few months after the fall of Saddam Hussein religious Iraqi Arabs voiced similar complaints about the United States presence. Clerics aligned with Muqtada al-Sadr to the Islamic Supreme Council of Iraq to the Association of Muslim Scholars all called for a new government based upon Islam. They also all condemned the American occupation. Dr. Ahmed Kubaysi of Baghdad and a member of the Muslim Scholars Association compared the U.S. to the Mongols who sacked the capital and killed almost all the inhabitants. One common refrain from religious Iraqis was that the Americans had allowed Israel into the country. There was one period where mosques across the capital were telling their followers not to sell their land because it would end up in the hands of Jews. There was even an agreement in Baghdad for Sunnis to lead Shiites in prayers and Shiites to lead Sunnis in mosques so that they might provide the same political message. This period of unity is largely forgotten today. The western narrative is that Iraq was always divided by sect between Sunnis and Shiites. While it’s true those divisions did quickly emerge it didn’t happen in the first few months in the aftermath of the invasion. The virulent fear of Jews was more predictable. Saddam Hussein like many Arab rulers had stoked anti-Israeli feelings to try to gain control of the Arab world.

Rosen went to Kirkuk city just before the January 2005 elections to show how fractured Iraq had become. He talked with a Kurdish general who associated all Arabs with being terrorists and said any that were arrested should be summarily executed. A Kurdish party official was convinced that all the Arabs would leave the province because they knew they didn’t belong since they had been moved in during Saddam’s era. Members of the Iraqi Turkmen Front had their own militia and a leader said he knew Kurds were illegally registering voters and that there would eventually be a violent clash between the two communities. The United Iraqi Alliance which contained the main Shiite religious parties was calling for people to vote because it was a victory for the leading cleric Ayatollah Ali al-Sistani who had forced them upon the Americans while the Sunnis Association of Muslim Scholars was calling for a boycott saying the election was illegitimate under an American occupation. President Bush said the U.S. was going to democratize the Arab world starting with Iraq. His administration praised the 2005 ballot as a game changer in the region. On the ground however Rosen found that the election simply codified the deep divisions within the country. The Kurds wanted their historical areas back and the Arabs to leave. The Turkmen were intimidated by the Kurds ascendency and were ready for a fight while the Arabs were split between wanting to assume power over the government and rejecting any new regime being created as long as the U.S. was in Iraq. The sectarian split within Arabs would eventually lead to a civil war which Rosen saw hints of in Baghdad at the end of the book. This is where the author’s time with common Iraqis and those associated with clerics, political parties and armed groups paid off. He wasn’t repeating Washington talking points because he wasn’t around Americans all the time like many journalists. He captured how Iraqis were going in all different directions which in turn was leading to increasing violence.

Nir Rosen presents a good book on the views of Iraqis in the two years after the American invasion. He documented the short period of united opposition to the U.S. and then how ethnosectarian communal demands took over. Shiites were gaining power while Sunnis were feeling shut out which eventually led the two to go to war. The author was one of the few that focused upon what Iraqis were thinking about the future of their country rather than what the U.S. was doing and therefore is an important work to read.