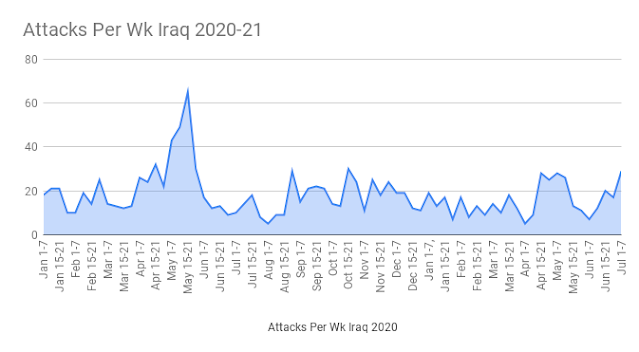 Violence spiked during the first week of July. That was due to the Islamic State increasing its campaign against Iraq’s power grid while pro-Iran groups picked up attacks in retaliation for the Biden Administration hitting Hashd camps.

There were a total of 38 security incidents reported from July 1-7 in Iraq. 9 of those were by pro-Iran factions leaving 29 by the Islamic State.

Those led to 46 dead and wounded. 1 member of the Iraqi Security Forces (ISF) and 10 civilians were killed while 2 U.S. soldiers, 4 Hashd al-Shaabi, 11 ISF and 18 civilians were injured. Anbar had the most casualties with 19 followed by 12 in Salahaddin. 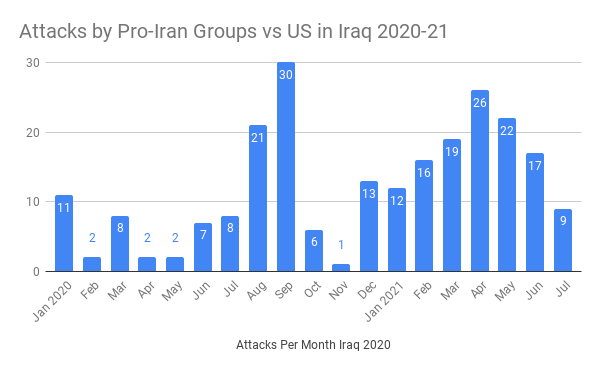 There were 7 attacks by pro-Iran groups with two more being thwarted. Convoys carrying supplies for the U.S. were bombed in Anbar, Babil, Baghdad, Diwaniya and Salahaddin. Rockets were also fired at the Ain Al-Asad base in Anbar twice and Irbil Airport. One of those missile incidents in Anbar led to two American soldiers being wounded. Rockets were dismantled aimed at Baghdad International Airport and a drone was shot down over the Green Zone. The last week of June there were only 2 attacks by these groups. The uptick was in retaliation for the Biden administration striking Kataib Hezbollah and Kataib Sayid al-Shuhada camps in Anbar and Syria at the end of June.

The main target of the insurgency was Iraq’s power grid. Electricity towers were bombed in Baghdad, twice in Kirkuk, twice in Ninewa, and in Salahaddin. IEDs were also dismantled by towers in Baghdad, Diyala, Ninewa and Salahaddin. Rockets were also fired at the North Gas Company in Kirkuk. The country is experiencing another hot summer and IS is trying to take down the electricity network to increase discontent with the government. That’s working as the nation is facing the worst power crisis since 2003.

There were four incidents in Anbar. That’s a lot for one week. There were two shootings and two IEDs all against the security forces. The province is usually very quiet because it’s used for logistics.

Besides the two incidents with power towers five IEDs were dismantled in Baghdad. One of these was in Khadimiya in the northern section of the city. In June IS hit the city proper which is very rare. The militants launched concerted campaigns to infiltrate into Baghdad in the past but gave up. It appears to be trying again.

Violence has changed in central and northern Iraq. Diyala is usually the most violent part of Iraq, but there were only four incidents this week. There were two shootings and an IED in the Muqdadiya and Khanaqin districts which are the centers of the insurgency along with the attempt on power towers which occurred in Azim in the north. A village was attacked and there was a kidnapping in Kirkuk, a checkpoint was assaulted and two IEDs went off in Ninewa, and three more bombs in Salahaddin. Violence went down in Kirkuk and Salahaddin last month but they appear to be rising again.

Iraq Newspaper, "ISIS terrorist attacks the army in Kubaisa and kills them," 7/5/21

Al Monitor, "Militias launch spate of attacks on US positions in Iraq," 7/7/21

- "2 Electricity Transmission Lines And 5 Towers Targeted With IEDs In Nineveh And Kirkuk," 7/3/21

- "An Attempt To Blow Up An Electrical Power Transmission Tower Thwarted And An IED Dismantled In Diyala," 7/7/21

- "A civilian was injured by an explosive device left behind by ISIS, south of Mosul," 7/4/21

- "A convoy of logistical support for the International Coalition forces was targeted with an explosive device in Babylon," 7/2/21

- "A force from the 25th Brigade in the Popular Mobilization thwarts an attempt to detonate the electric towers south of Nineveh," 7/4/21

- "An IED Explodes On A Detachment To Maintain Electricity Networks In Diyala," 7/4/21

- "Seven Civilians Killed And Wounded In Clashes With ISIS, Northeast Of Baquba," 7/5/21

- "Targeting a convoy of logistical support for the International Coalition forces in Salah al-Din," 7/2/21

- "Thwarting an attempt by ISIS terrorist gangs to blow up a power transmission tower north of Baghdad," 7/6/21

- "Two members of the crowd were injured in an explosive device explosion in Anbar," 7/5/21

Shafaq News, "A bombing targets a logistical support convoy of the International Coalition on the outskirts of Baghdad," 7/4/21

- "Injuries among the ranks of the Iraqi army in an ISIS attack, southeast of Mosul," 7/4/21

- "Three soldiers injured in an explosion in Salahaddin," 7/5/21

Al Sumaria, "Intelligence thwarts a second attempt to blow up an electricity pole in the island of Tikrit," 7/2/21

Given the difficult political situation in Iraq, it is very interesting to see your published security data in that country. Thanks for sharing!