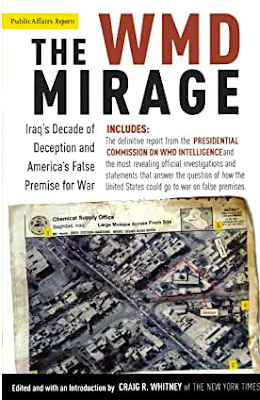 The WMD Mirage, Iraq’s Decade of Deception and America’s False Premise for War contains primary documents on the U.S.’s claims about Iraq’s weapons of mass destruction and nuclear program. It starts with what the Bush administration thought Iraq was doing, then covers the reports by the United Nations’ inspectors, and finally ends with the various investigations into America’s pre-Iraq war intelligence on Iraq. It is packed full of information but it gets monotonous in the last third of the book because many of the same points are covered over and over. Still, this is an important collection because it shows not only what the White House was saying but U.S. intelligence as well and how utterly wrong they were. In the process it disproves some common myths about the U.S. case for war.

In 2002 the Bush administration launched its public campaign against Iraq which is where The WMD Mirage begins. It includes three speeches by President Bush, the October 2002 National Intelligence Estimate on Iraq, and Secretary of State Colin Powell’s 2003 presentation to the U.N. The NIE said that Iraq not only had stocks of WMD but was producing them at larger rates than before the Gulf War and that it had restarted its nuclear program. This was the major intelligence document on Iraq and showed the kind of information the White House was getting. The U.S. also argued that Iraq was hiding these programs from the United Nations inspectors. Powell for instance, played tapes that seemingly showed Iraqis giving orders to clean up suspected sites of banned materials. When no WMD was found after the 2003 invasion many believed the U.S. lied about the Iraqi threat. These documents prove that was wrong because everything Bush and his underlings said came from intelligence reports like the NIE. The Central Intelligence Agency and others were completely wrong about Iraq which was why the White House made such false claims.

U.S. Case Against Iraq vs Reality

- Iraq destroyed its chemical weapons and ended program in 1991

- Trucks were used for water and maintenance

- Based upon Iraq trying to buy dual use equipment like magnets

- Based upon Iraq trying to buy uranium from Niger

Iraq-Niger story was made up

The book then moves to the 2003 reports by the head U.N. inspectors Hans Blix and Mohammed El Baradei to the Security Council. The process started off rough but Iraq eventually became more cooperative allowing unhindered inspection of sites, surveillance plane overflights, and interviews with officials. Blix commented it shouldn’t have taken so long for all of that to happen. He also mentioned one major sticking point which was Baghdad’s claim that it secretly destroyed its stocks of WMD in 1991 but that it had no records of it. The U.S. would claim that these chemical and biological agents and weapons still existed and were part of the Iraq threat. Just as important no WMD or programs were found. On the other hand, right on the eve of the U.S. invasion in March 2003 El Baradei told the U.N. that Iraq had no active nuclear program. The aluminum tubes Iraq tried to import which the U.S. said were for centrifuges to enrich uranium for a weapon turned out to be for rockets. The magnets that Iraq bought were not for the nuclear program. The story Baghdad tried to buy uranium from Niger proved false. This debunked all of America’s major arguments. Many in the U.S. only heard what the Bush administration said about the inspectors which was that they would never find anything because of Iraq’s deception campaign. Blix and El Baradei however showed that Saddam was slowly complying and that there was at least no nuclear program. There were still questions about WMD however. The White House never accepted any of that and the U.S. public barely heard what the inspectors actually said. Blix and El Baradei would ultimately prove right. Again, this is another plus of the book because it shows what was found versus what the White House was propagating.

The WMD Mirage ends with the three investigations into Iraq’s WMD and U.S. intelligence, the first by the Iraq Survey Group, then by the Senate Intelligence Committee and finally by a presidential commission. The last is the most important because it collects together the main points from the first two. It found that the U.S. was dead wrong about Iraq. The claim that Iraq had a growing biological weapons program was based upon a single source, an Iraqi asylum seeker in Germany codenamed Curveball. The Americans only had direct access to him once and there were major questions about his reliability while never questioning why such an important claim would be centered around a single person. Second, the belief that Iraq had an active chemical weapons program came from satellites that photographed trucks at suspected sites that intelligence associated with WMD. The U.S. increased their collection at those areas after the trucks were spotted which gave the impression that the Iraqis were being more active when it was just more pictures being taken. The CIA failed to correctly assess the tubes Iraq tried to buy which was a technical issue. It also ignored the opinion of the Department of Energy the experts in the field who said the tubes were likely for rockets. Last, just as the U.N. inspectors found the U.S. eventually admitted that documents on Iraq trying to buy uranium from Niger were fakes. The Senate and commission both concluded that the reason why intelligence agencies took these largely innocuous bits of information and used them to argue that Iraq had WMD and a nuclear program was because they assumed Iraq restarted them after inspectors left in 1998. This was because Iraq tried to hide its programs from the U.N. That led to group think where only stories and analysis about the Iraq threat were excepted. The Senate and commission believed that it was reasonable for the U.S. to assume Iraq had these capabilities but it was an utter failure to make the jump to claiming Iraq was producing WMD and trying to make a nuclear bomb based upon such spotty sources like Curveball. The first part of the book shows where all the false claims by the White House came from. The last section is about how all the intelligence was completely off. It also found that there was no political interference with the intelligence findings. The CIA and others believed Iraq had WMD and a nuclear program and that’s what the Bush administration said.

The main problem with the book is the last part that repeats the same issues over and over and over. For instance the findings of the Senate and the presidential commission were almost the same and went over the same things like the aluminum tubes and Curveball. It also includes their recommendations which were to try to fix the bureaucracy in the intelligence agencies sometimes by creating more bureaucracy. Those parts aren’t really essential reading. Otherwise The WMD Mirage is an important release because it contains the essential documents over the case for war with Iraq. It disproves two popular beliefs, one that Bush and company lied about Iraq’s WMD and that they pressured U.S. intelligence to come up with findings that they wanted. In fact, all the problems started with the CIA and others who assumed Iraq was doing wrong which became the basis of all their reports.