Review Among Warriors In Iraq, True Grit, Special Ops, and Raiding in Mosul and Fallujah 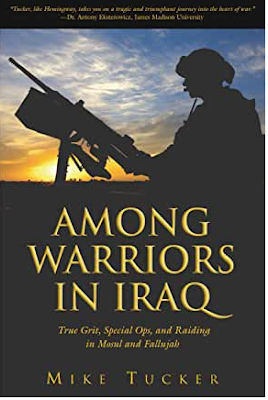 Mike Tucker’s Among Warriors In Iraq, True Grit, Special Ops, and Raiding in Mosul and Fallujah focuses upon the enlisted men and low ranking officers in the first year of the U.S. occupation of Iraq. He spent a few weeks in Mosul and Fallujah from 2003-04 with various American units and wrote about their day to day operations and their feelings about the war. He captured their frustration fighting an insurgency where they didn’t know who the good and bad guys were. On the other hand, neither the soldiers nor the author had any idea what they were doing in Iraq. They valorized action over anything else and considered all Arabs the enemy. Tucker was also enamored with the Kurds which slanted much of his writing.

Nearly every soldier Tucker spoke with was bitter about fighting in Iraq. They complained about the rules of engagement which said they could only shoot when fired upon. They were angry with their superiors who they felt constrained them from being more aggressive. They were mad that most Iraqis didn’t greet them as liberators and were angry at a foreign occupation. They were frustrated that they couldn’t tell who was an insurgent and who wasn’t which made them suspicious of nearly everyone. The root cause of these feelings was that American soldiers were trained for combat and not the occupation of a country. They wanted to shoot and kill, not patrol markets or walk up and down roads looking for improvised explosive devices (IEDs). Yet the latter was the mission they found themselves unprepared for. Tucker and the soldiers always talked about how they were warriors. That was not congruent with what they had to do in Iraq. By doing so Tucker inadvertently explains why the occupation went so wrong for so long. The American forces were too aggressive, too abusive and angered too many Iraqis because of their attitudes towards their mission. Ironically, Tucker didn’t even know he was writing about this because he had the same view as the troops.

Tucker’s limitations as a writer are apparent throughout his book. He was as gung ho as the soldiers he interviewed. He wanted combat as much as they did and thought of himself as a warrior as well as he was ex-army. He also spent time with the Kurds before the 2003 invasion documenting the many crimes against them by Saddam Hussein. That completely shaped his writing. Repeatedly he talks about Kurdish massacres by the former regime and implies that Iraqi Arabs were all complicit. Like the troops he was with he viewed nearly all Arabs as the enemy and even said that the Baathists and former soldiers and police should all be hunted down and killed by the Americans. The Baath Party had over one million members and associates and the military consisted of a few hundred thousand personnel. At the end he said that the United States should create an independent Kurdistan and use it as a base to threaten Arab Iraq with annihilation if it didn’t stop supporting terrorists. Finally, Tucker provided no context or analysis of what he saw. In fact, he was ignorant of some major events going on in Iraq that could have easily been garnered from reading a newspaper.

The issues with Among Warriors In Iraq greatly outweigh the insights about American soldiers. Yes, you get a ground eye view of some troops in Iraq in 2003-04, but the lack of context, the glorification of combat, the anti-Arab views and more make it a bit of a train wreck. Tucker went to Iraq to try to see what the war was all about and came away none the wiser.