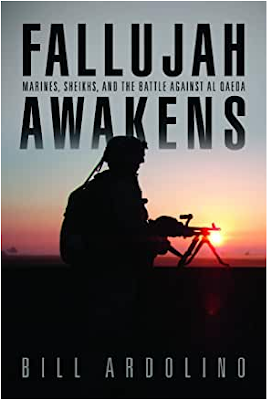 Fallujah Awakens, Marines, Sheikhs, and the Battle Against Al Qaeda is Bill Ardolino’s tale of how the Marines forged an alliance with sheikhs from the Albu Issa tribe in the Fallujah peninsula south of the city to battle the Islamic State of Iraq (ISI) in 2007. The area was a base for ISI and split the Albu Issa literally in half. A few sheikhs were tired of the insurgents taking over their territory and asked the Americans for help. The story is about how ISI alienated members of the Albu Issa while the Marines tried new tactics which turned around the security situation.

Ardolino uses an easy to read narrative style to explain the situation in the Fallujah Peninsula. He begins with how the locals initially welcomed the insurgency for a number of reasons from Iraqi nationalism to Islamic fervor. By 2006 however splits were starting over the Islamic State of Iraq taking men to be fighters, intimidating those that didn’t follow its orders and killing its competitors. That led to meetings with Aifan Sadoun Aifan al-Issawi who was a lowly sheikh in the tribe but wanted to fight ISI. Most of the book is on this background and then the two sides feeling each other out to see whether an alliance could be forged or not.

Ardolino also covers the ups and downs in the relationship. For instance, Issawi’s men liked to torture their prisoners which the Americans were uncomfortable with. The U.S. also spent several million dollars in projects in the Fallujah Peninsula very few of which panned out. Much of the money was pocketed by the sheikhs with more being taken by middle men and ISI who extorted businesses. This was considered the price of doing business with the tribes. Ardolino talks about how some thought this was just bribes to the sheikhs but the author believes that ignores the deep seated hatred some of these men had for ISI.

The most dramatic event in Fallujah Awakens takes place in March 2007 when ISI attempted to set off a chlorine truck bomb in the middle of a town. 2 militiamen blew it up but the fumes from the truck sickened hundreds of villagers including kids. The Marines responded by taking them to their base and tending to their illnesses. This was a turning point where the population really saw the benefits of working with the Americans. Many Marines also saw the humanity of the Iraqis who’d they’d often been angry and frustrated with before.

There are a few minor drawbacks to the book. For one, Ardolino conflates Al Qaeda for ISI saying they shared the same Salafist ideology and strategy which included killing fellow Muslims. ISI however went far beyond what Al Qaeda believed in starting a civil war between Iraq’s Sunnis and Shiites something Osama bin Laden repeatedly objected to. The author also repeats the American belief that Abu Omar al-Baghdadi who succeeded Abu Musaq al-Zarqawi was a fictional person and that ISI wasn’t a real group, just a front for Al Qaeda in Iraq both of which are false. These were common ideas at the time. Overall these are just road bumps in what is an otherwise entertaining story of a successful tribal outreach in Fallujah.

Most of the books about Anbar focus upon the first two battles of Fallujah or the Anbar Awakening that started in Ramadi. This is one of the few that looks at another area of the province. It is very easy to read and engaging. It presents the story from both the Iraqi and Marine point of view which is important because U.S. books usually just deal with the Americans. It provides an important piece of the story about how security was turned around in the province.