Iraq’s Oil Exports Up In August But Prices Drop 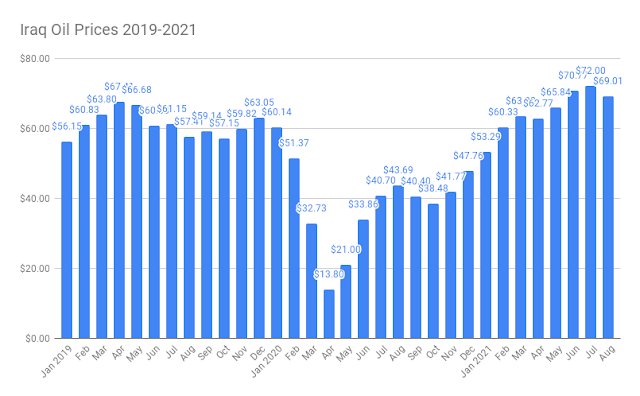 Iraq boosted its oil exports in August to the highest level in over a year but its profits were largely flat due to a drop in prices.

In August Iraq exported an average of 3.054 million barrels a day in oil. That was up from 2.918 million in July. That was the highest figure since May 2020’s 3.212 million which was before OPEC+ started its production quota to try to stabilize prices which were free falling after a price war between Russia and Saudi Arabia and the COVID epidemic hit the world. Iraq’s quota is increasing which should allow it to export around 3 million barrels a day from now on. For the year Iraq has been averaging 2.9 million barrels a month.

The rise in exports didn’t help the country’s revenues however. It earned $6.533 billion for the month only slightly up from July’s $6.513 billion. That was because prices dropped from $72 per barrel to $69.01 during that same period. Overall Iraqi crude has been rising from $53.29 in January to $60 from February to May and then hitting the $70 mark in June and July. That showed that the OPEC quotas along with life returning to normal despite COVID have led to the energy market to recover.