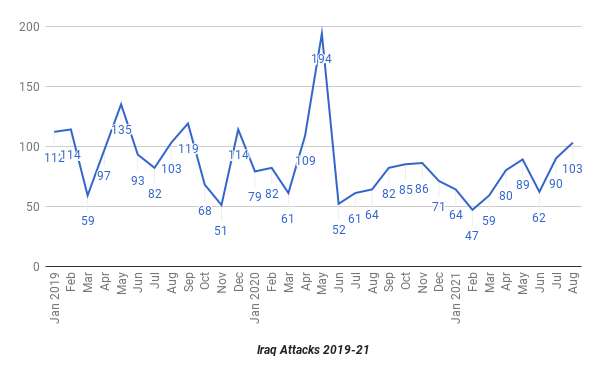 The Islamic State’s summer offensive in Iraq came to an end in August as incidents decreased each week of the month. Pro-Iran groups on the other hand picked up their operations to carry out the most attacks of the year so far.

There were a total of 133 incidents recorded in Iraq in August. That was up from 110 in July and the highest monthly figure in 2021.

A total of 54 people were killed and 82 wounded during the month. 11 Hashd al-Shaabi, 15 civilians and 25 members of the Iraqi Security Forces (ISF) died while 3 Fijians, 16 Hashd, 32 ISF and 34 civilians were injured. Salahaddin had the most casualties with 48. 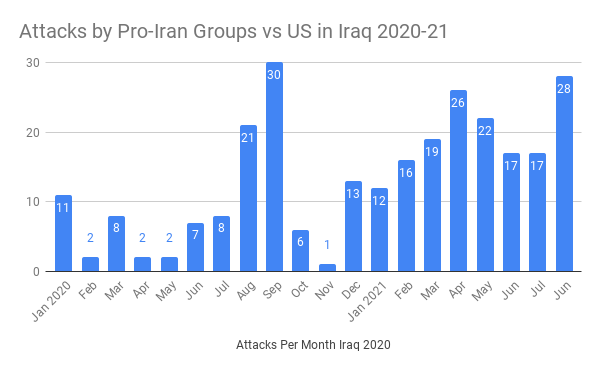 Pro-Iran groups carried out 30 incidents during the month. 27 of those were IEDs on supply convoys working for the U.S. in Anbar, Babil, Baghdad, Basra, Dhi Qar, Diwaniya, Muthanna, and Salahaddin. Another two bombs were dismantled in Diwaniya. Rockets were also fired at Kuwait. This was not the first time these groups have attacked neighboring countries. The 28 incidents were the most by these factions in 2021 and second only to the 30 recorded in September 2020.

IS attacks declined each week from 39 the first week to 25 the second to 17 the third to 12 the fourth and 10 the last three days of August. That showed that the insurgents’ summer campaign which started in June had ended.

The major target during August was Iraq’s electricity grid. Power towers were blown up in Babil, Baghdad, Diyala, Kirkuk, Ninewa, and Salahaddin. IEDs were also dismantled twice in Anbar. There were electricity outages throughout the country as a result. This was aimed at undermining the government during the summer heat. 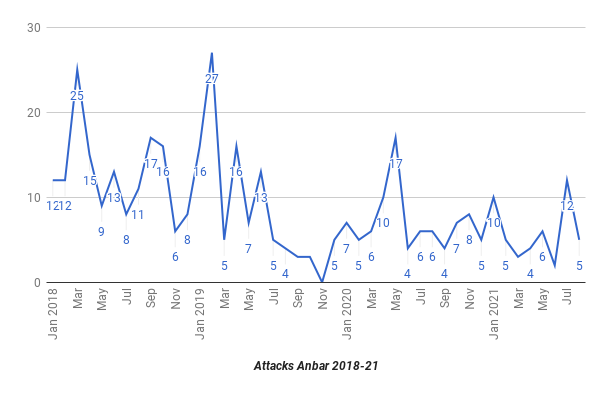 Anbar went from 12 incidents in July to 5 in August. The biggest incident was an attack upon the Akashat border crossing which led to one border policeman being killed, another wounded, and a third being kidnapped who was then beheaded by IS. That was likely to intimidate the guards to allow IS smuggling. 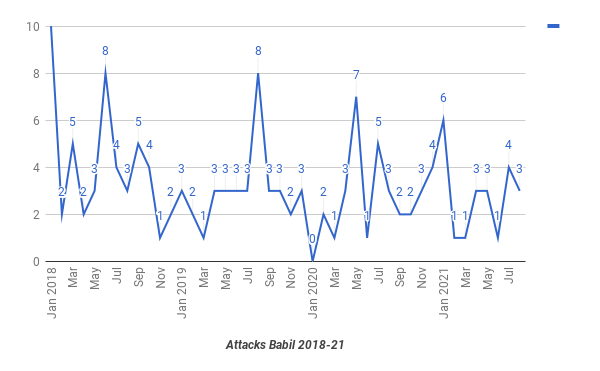 Violence in Babil remained steady from 4 incidents in July to 3 in August. At the start of the month IS killed a Hashd commander south of Hilla. There were actually far more attacks by Pro-Iran groups during August. 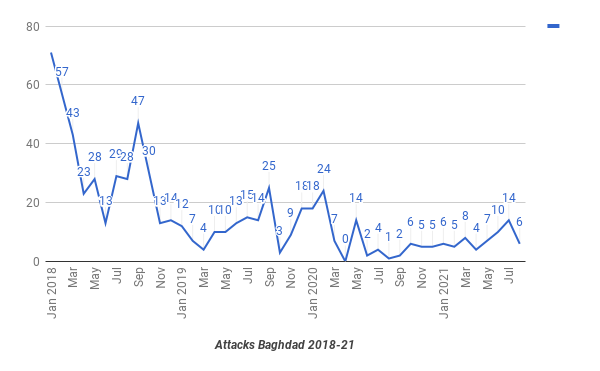 Attacks were cut more than 50% in Baghdad from July to August. IS was most active in the Tarmiya district in the north. That included an attack upon a Hashd brigade headquarters that left 12 casualties including a dead regiment commander. The government responded with security operations in the district but it’s yet to be seen whether those were effective. 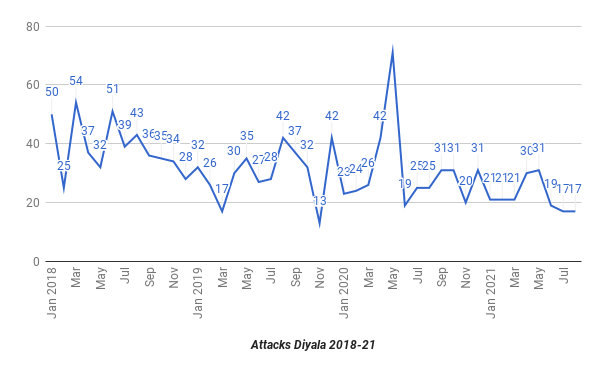 During the summer IS moved away from Diyala which is regularly the most violent area of the country. There were 17 incidents each in July and August. On the other hand, IS was spreading out from its bases in the Muqdadiya and Khanaqin districts to hit the north in the Buhriz area. That included an attack upon a village where a factory was also burned. Insurgents already regularly traverse the district to go back and forth to Salahaddin. Perhaps they are attempted to establish de facto military control of the area as well now. 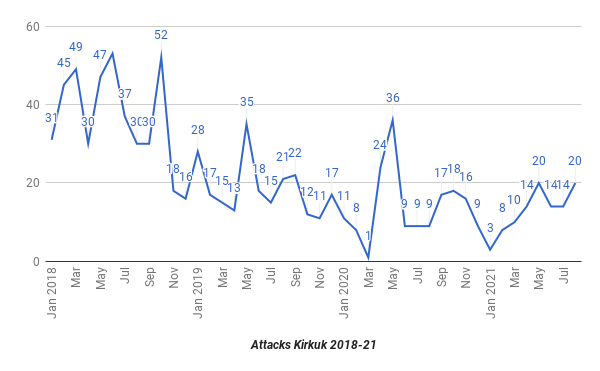 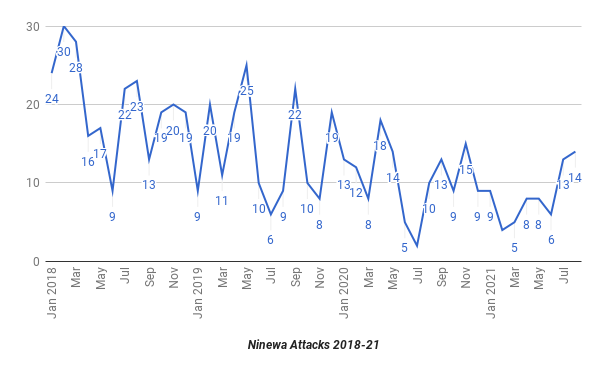 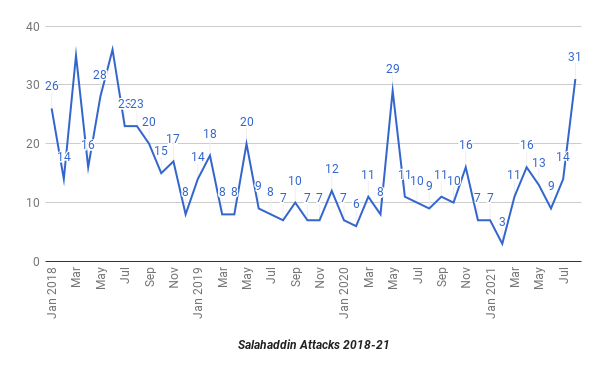 Kirkuk, Ninewa and Salahaddin were the main targets during the month. Incidents went from 14 to 20 in Kirkuk, 13 to 14 in Ninewa and 14 to 31 in Salahaddin from July to August. Most of those were attacks upon the power grid, especially in Salahaddin where 14 electrical towers were taken down in just one night. An army base was also assaulted at the start of the month. Three villages were attacked in Kirkuk including one at the end of the month where insurgents burned cars, tractors and killed the livestock. These were meant to either force locals to pay taxes to the Islamic State or drive them out. Ninewa is usually very quiet because it’s used as a logistics hub by IS so the increase in violence there was a sign of the group’s campaign. Still, more than half of the incidents were IEDs.

Last, IS hit Irbil once a week during August. That included shootings, kidnappings, attacks upon checkpoints and two villages that were hit. These all took place in the Makhmour district in the south which is a disputed area. The insurgents were taking advantage in the gaps in security between the Iraqi forces and the Peshmerga.

Bas News, "IS Executes a Civilian, Kidnaps Another in Disputed Kurdish Areas," 8/9/21

NINA, "The Commander Of The 9th Brigade In The Popular Mobilization Forces, Martyred South Of Hilla," 8/2/21

- "Unidentified Gunmen Burn A Brick Factory And Attack A Military Patrol With An IED In Diyala," 8/19/21

Shafaq News, "Two days after his kidnapping, ISIS beheads an Iraqi soldier on the Syrian border," 9/1/21

- "A victim and injured in a double attack targeting the Iraqi border guards," 8/30/21

Sotaliraq, "Iraq..Darkness descends on Salahaddin after 14 electricity towers were targeted with explosive devices," 8/5/21