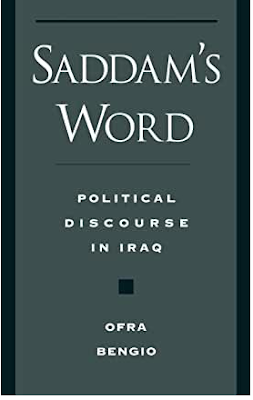 Saddam’s Word, Political Discourse In Iraq by Ofra Bengio is an analysis of the language and rhetoric used by the Baath Party and Saddam Hussein. It explores what words and phrases were popular, their provenance and then tries to explain how and why they were selected to further Baathist rule in Iraq. It’s a very interesting study of how the Iraqi government attempted to rally the public to support its policies using history and Islam.

The book is divided into three broad sections. The first is about how the Baath portrayed itself as a revolutionary party and regime. It attempted the Baathization of society where everyone starting with the youth were indoctrinated with its ideas. Part of this included creating a cult of personality around Saddam. Next, Bengio goes through how Shiites and Kurds were characterized by the regime. Finally, it talks about how Baghdad always said it was facing threats and was under attack which eventually led it towards the use of Islam. Bengio was one of the earliest to touch on how the secular Baath Party moved towards religion to defend itself. The author writes that the use of Islam went up and down depending upon the needs of the government. At first, the regime was following its Baathist doctrine and establishing its power. Then in 1977 there were riots by Shiites followed by the 1979 Iranian Revolution and the Iran-Iraq War all of which had religious elements. The Baath responded by trying to use Islam to counter these challenges. At first, Saddam said that the Baath was a party of faith and those based upon religion were the enemy. Then when the war with Iran got under way and especially when it went wrong Saddam would use religion more and more giving speeches about how Arabs were the true Muslims and Ayatollah Khomeini as an Iranian was not. This language would continue into the 1990s with the Gulf War which Saddam said was a jihad against western Christians. Bengio doesn’t believe that the Baath became a religious party but that it used it to suit its purposes.

Each part is based upon extensive research into Baathist documents, newspapers, books and speeches. For instance, he goes through all the different words used for revolution. Inqilab was the first used by the Baath in 1947 when it declared itself a revolutionary party. In 1958 Baath founder Michel Aflaq switched to thawra instead. In turn, by the 1960s inqilab had become a negative term for military coups. When the Baath took power in 1968 it claimed it had carried out a thawra and not an inqilab. As Bengio notes the Baath always presented a black and white world and its language was a reflection of that. You were either with the revolution which was solely Iraqi or you were the enemy. The book presents all kinds of quotes and speeches to back up its theory. It’s very impressive.

Saddam’s Word is an unconventional history. It takes a unique view of Baathist rule in Iraq studying its use of language over time rather than the events of how it came about and governed. It was also one of the first to tackle how a secular party moved increasingly towards Islam starting in the 1970s because of various threats to its rule both internally and externally. It’s a very interesting read and adds a new dimension to the normal books about Saddam and the Baath.