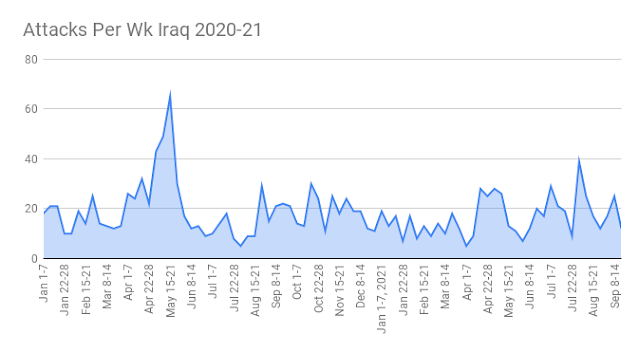 Violence has gone up and down nearly every week since the spring and the third week of September was no different. After going up for two weeks incidents dropped afterward.

There were a total of 13 security incidents recorded in Iraq from September 15-21. That was down from 28 the week before and 20 the first week of the month. This has been the pattern for the last several months as neither the insurgency nor the pro-Iran factions have carried out sustained operations for more than a few weeks at a time. 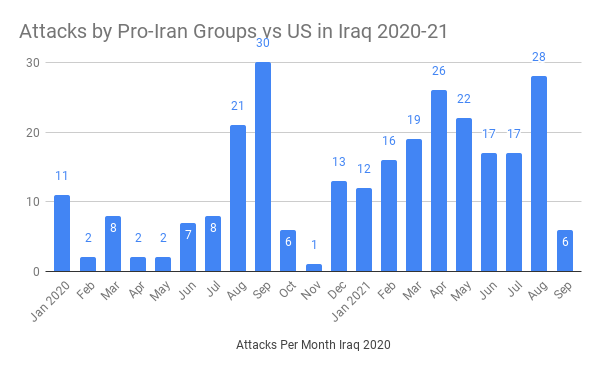 One incident was by pro-Iran groups who hit a logistics convoy working for the U.S. in Dhi Qar with an IED. That makes a total of 6 attacks by these factions this month. That’s a much slower pace than last month where there were a total of 30 incidents.

Anbar and Ninewa remain logistics hubs for the insurgency. There were two incidents in Anbar and one in Ninewa all of which were IEDs. Most attacks in these two provinces are meant to keep people away from areas IS is moving through and has camps.

A member of the Hashd was killed by a sniper in Babil’s Jurf al-Sakhr district in the northeast. This is a large Kataib Hezbollah base which IS routinely targets.

The Islamic State continues to probe and exploit areas of Kurdistan. There was another incident in Irbil’s Makhmour district when a checkpoint was hit. Insurgents also dressed as Asayesh and set up a fake checkpoint in southern Sulaymaniya. They ended up killing two and wounding 4 civilians. Sulaymaniya was last attacked in April. IS appears to be testing new areas to see what security is like.

Diyala had the most incidents as usual. Out of the six incidents two were in Muqdadiya in the center and three in Khanaqin in the northeast. One was in Buhriz in the northeast. The biggest attack was upon a checkpoint where IS set up an IED to hit reinforcements that arrived. It left 1 soldier dead and 5 wounded. Muqdadiya and Khanaqin are IS’s main bases for operations in Iraq. It has been trying to assert control over Buhriz which it routinely uses to move men and material through.

- "A member of the Popular Mobilization was killed by sniper fire north of Babylon," 9/15/21

Al Sumaria, "An explosive device explodes on the vehicle of a leader in the tribal mobilization in Anbar," 9/15/21