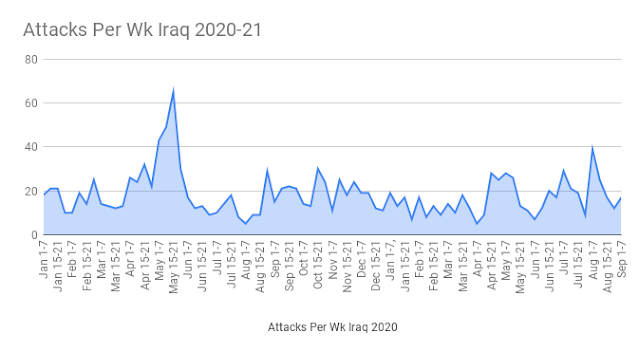 Security was relatively the same in Iraq at the start of September as the end of August. Islamic State incidents were in the teens and pro-Iran groups were still striking American targets in the country.

There were a total of 20 security incidents recorded from September 1-7. The last full week of August there were 21 and 25 the week before that. 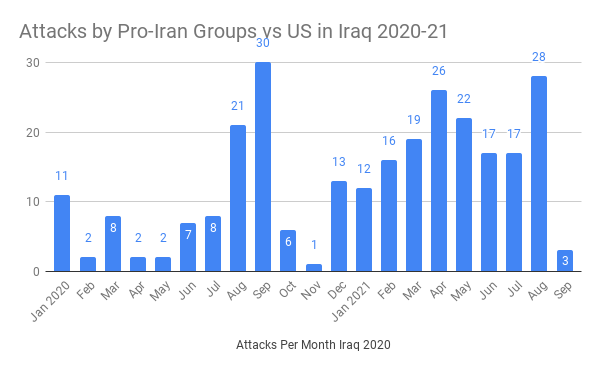 3 of those incidents were by pro-Iran groups. They hit supply convoys working for the U.S. in Diwaniya (1) and Babil (2). In August these factions carried out the most attacks of the entire year. This is part of Tehran’s policy to pressure the United States over its presence in Iraq and future talks over Iran’s nuclear program.

There were 17 incidents by the Islamic State during the week. August was the last month of the insurgent’s summer offensive. Each week incidents went down with the last two weeks being in the teens. The start of September was in tune with that.

22 people were killed and 24 wounded as a result. 1 Hashd al-Shaabi and 21 members of the Iraqi Security Forces (ISF) died and another 3 Hashd, 10 ISF and 11 civilians were injured. Kirkuk had the most casualties with 29.

In Anbar, a border policeman who was kidnapped at the end of August was found beheaded. This was likely to intimidate the border guard to allow IS smuggling. There was a stun bomb and an IED in Ninewa. There are usually few incidents in either province because they are logistics hubs for the militants.

An IED was dismantled by a power tower and a sticky bomb killed a Hashd commander in Babil. The country’s electricity grid was the main target during August. This was likely the last attack in that campaign. The Hashd leader died in Jurf al-Sakhr which is a large Kataib Hezbollah base and the favorite target of IS in the province.

Most of the incidents in Diyala during the week were minor shootings and a sticky bomb. A village was attacked along with a checkpoint. The militants have been doing this to drive people out and make them pay taxes. One of the attacks was in the Khanaqin district in the northeast and two in Muqdadiya in the center. These are the main areas IS has control of in Diyala.

The biggest incident of the week took place in south Kirkuk when IS attacked a checkpoint and set up IEDs to block reinforcements from arriving. 13 police were killed and 6 wounded as a result. These are routine tactics meant to keep the security forces out of IS areas, but rarely do they result in such large casualties. Another village was assaulted in Kirkuk and a mukhtar’s son kidnapped as well.

There were two confrontations with the militants in Salahaddin and a sticky bomb was dismantled. Incidents skyrocketed in the governorate last month as it was the focus of the summer offensive. Otherwise, attacks have gone up and down there over the last few months.

Finally, IS continues to hit the Makhmour district of southern Irbil. There were three more incidents there during the week with a gun battle that left 3 soldiers dead and another wounded, an assault on a checkpoint and a farmer being kidnapped.  The militants have obviously found weak points in the security there and are routinely exploiting it.

NINA, "An Army Member Martyred And Seven Wounded In An ISIS Attack On A Village In Kirkuk," 9/2/21

- "An attack with mortars and sniper weapons targeted a village and a military point northeast of Baquba," 9/1/21

- "An Attempt To Detonate A Tower To Transmit Electric Power Thwarted In Babylon," 9/2/21

- "An improvised explosive device attack targets a convoy of the International Coalition in Babylon," 9/6/21

- "A leader in the Popular Mobilization survived an assassination attempt in Baquba," 9/4/21

- "A policeman was injured and a thermal camera destroyed in an ISIS attack on a joint security point in Diyala," 9/6/21

- "The Popular Mobilization Forces kill a number of ISIS elements by repelling them, east of Tikrit," 9/1/21

- "Two of Salim al-Jubouri's protection were injured in an armed attack northeast of Baquba," 9/5/21

- "Two policemen injured in an explosive explosion south of Mosul," 9/5/21

Shafaq News, "After attacking the army, ISIS elements kidnapped a farmer in Makhmour," 9/5/21

- "A crowd member was injured in repelling an ISIS attack east of Salahaddin," 9/5/21

- "In less than an hour … the second attack on the international coalition convoys in Iraq," 9/4/21

- "At least one Iraqi army victim was killed in an ISIS attack in Makhmour district," 9/2/21

- "In less than an hour … the second attack on the international coalition convoys in Iraq," 9/4/21

- "Two days after his kidnapping, ISIS beheads an Iraqi soldier on the Syrian border," 9/1/21