Review The Greatest Threat, Iraq, Weapons of Mass Destruction, And The Growing Crisis Of Global Security 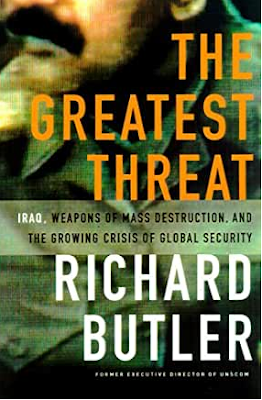 Richard Butler was the second head of the United Nations Special Commission (UNSCOM) tasked with disarming Iraq of its weapons of mass destruction after the Gulf War. He served as Iraq refused to cooperate and shut down the inspection process from 1997-99 which is the topic of The Greatest Threat, Iraq, Weapons of Mass Destruction, And The Growing Crisis Of Global Security. He characterized that time as one of growing intransigence as Saddam Hussein caused one crisis after another to end inspections.

When Butler took over UNSCOM Iraq was still concealing its WMD from the United Nations which had been its strategy from the start. One example of this was Iraq’s VX program. Missile fragments were discovered which contained residue of the deadly VX. Iraq initially denied that it had ever worked on the agent, then that it had developed it but only in small amounts but never weaponized it. Baghdad said it only produced 200 liters of VX but it was later discovered the real amount was 3.9 metric tons and that it had been placed inside missile warheads. Those were then secretly destroyed which caused yet another problem with the inspectors because Iraq couldn’t fully prove what it had done. This showed that Saddam never wanted to work with UNSCOM and was actively hiding what Iraq did. Butler has several examples of this besides VX which caused him endless frustration. It was also the reason why sanctions were maintained against Iraq because it was not forthcoming about its weapons programs.

Most of The Greatest Threat is on how Iraq transitioned from hiding its programs to trying to force the inspections to end. That began in late 1997 when Iraq said that first American and then British inspectors would not be allowed to do their work in the country. It then blocked UNSCOM from entering sites. This led to one crisis after another with Butler being forced to withdraw his staff from the country. Iraq also unsuccessfully pushed for sanctions to end. The author doesn’t explain much of Iraq’s motivation because he wasn’t privy to it at the time, but Saddam had decided that the U.S. and England were never going to allow sanctions to end which were imposed after the invasion of Kuwait so therefore there was no reason to allow UNSCOM to continue. Russia, France and China were also pushing for the end of the inspections and the embargo as well giving Iraq another incentive to shut down the U.N. Butler covers those three countries’ machinations on Iraq’s behalf in some detail.

The Greatest Threat is important for several reasons. First, it documents how Iraq never complied with U.N. resolutions to get rid of its WMD. From the start Iraq concealed its programs and then refused to cooperate. This led Butler and the U.S. and England not to trust anything Iraq said about its weapons programs. That would help lead to the 2003 invasion of the country. The irony is that Iraq destroyed all of its WMD and shut down its programs in the early 1990s because of the U.N. but didn’t want to come clean about it because Saddam believed the weapons were necessary for him to stay in power and stave off regional rivals Iran and Israel. It’s also interesting because by the end of the 1990s UNSCOM wasn’t seeking out stocks of chemical and biological weapons anymore. Everything was about a dispute over information. The inspectors wanted Iraq to admit everything it worked on and it refused. There were unaccounted for stocks of WMD that Iraq said it had destroyed but it was providing some evidence that it had done so. By 2002 Washington and London were claiming that these agents and munitions were still in Iraq’s possession and was used as proof that it was a global threat. They of course did not exist and the U.S. and England went to war mostly on the basis of those claims. The Greatest Threat provides background to how those two countries came to that erroneous conclusion.