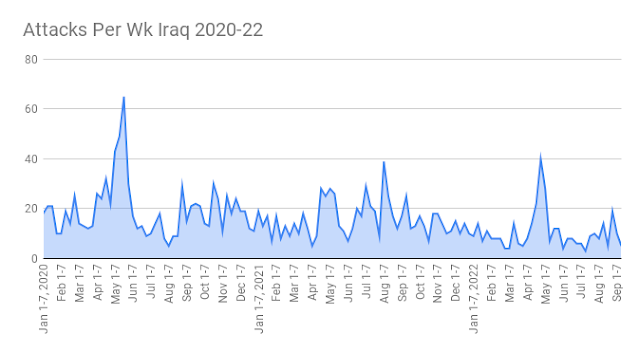 It appears that the Islamic State’s short lived summer offensive is over after just one month. This was the latest sign that the insurgency is barely hanging on in Iraq.

There were just 5 incidents reported in Iraq in the media from September 8-14. In comparison there were 11 the first week of the month.

They left 12 wounded made up of 4 civilians and 8 Hashd al-Shaabi. Diyala had 1 wounded, Baghdad had 3 and Ninewa and Salahaddin had 4 each.

In north Babil a government worker was shot at. An IED went off in the Tarmiya district of northern Baghdad that wounded 3 civilians. Another bomb exploded in southwest Diyala that wounded 1. A security sweep in the Hatra area of Ninewa caught a group of insurgents in a tunnel who put up a fight which wounded 4 Hashd before they were killed. Finally, there was a third bombing in Salahaddin that injured another 4 Hashd. The Babil shooting appeared to be a targeted killing. The other four incidents were the usual defensive ones aimed at keeping people out of insurgent controlled areas.

In the previous weeks IS had been able to get into the teens in incidents during its short lived summer campaign. In 2021 weekly incidents were in the teens and twenties with a high of 39 the first week of August during the summer. In 2020 attacks were in the twenties during that period. This is just another sign that the insurgency is disappearing in Iraq.

- "A Farmer Injured in an Explosive Device Explosion in Diyala," 9/8/22

- "Four fighters of the Popular Mobilization were wounded in an explosive device explosion in Salah al-Din," 9/10/22

- "Unidentified gunmen attack the house of an employee of the Ministry of Education, north of Babylon," 9/14/22