August saw the Islamic State finally launch its summer offensive. The number of incidents were still far below the previous years. Pro-Iran groups were also active during the month but a much lower level due to ongoing disputes over forming a new government.

There were a total of 57 incidents in Iraq reported in the media in August. That was up from 43 in July and 40 in June. 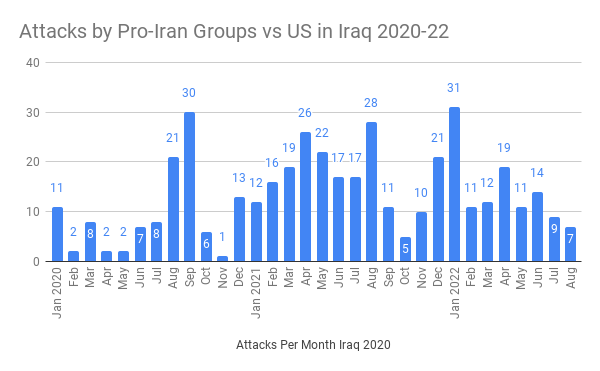 There were 7 incidents by pro-Iran groups. That was down from 9 in July and 14 in June. There were two rocket attacks upon a Turkish military base in northern Ninewa which is targeted every month now. These factions justify these attack by saying they are standing up against foreign occupiers. Rockets were also discovered at at the Khor Mor gas field in Sulaymaniya which was a warning to the Patriotic Union of Kurdistan to stick with the Coordination Framework in government formation talks. There were also four IEDs. Two were against convoys carrying supplies for the U.S. in Salahaddin, one was aimed at a mall in Baghdad owned by a Turkish company, and the third hit an Australian diplomatic convoy outside the Green Zone. The Australians have been trying to mediate between the different factions trying to form a government. The bombing was likely a warning to them.

Additionally, the Sadrists fired rockets towards the Green Zone during the fighting with Hashd aligned with the Coordination Framework on August 30. They fell short and landed on two neighborhoods.

That left 49 attacks by the Islamic State. In June there were 26 incidents going up to 37 in July. The increase was due to the insurgents finally launching their summer offensive. These figures were far below the last few years when incidents reached over 100 per month.

Besides the increase in incidents where they took place pointed to a new campaign by IS. Baghdad for example had 4 incidents each in April and May, 1 in June before going up to 7 in July and 5 in August. The capital province is only really hit during annual campaigns by IS.

Still, despite the new offensive the Islamic State is severely constrained in what it can do. During the first week of the month there were 7 incidents but none were offensive in nature. During the second week there were 14 attacks but all were defensive aimed at keeping people and the government out of IS areas such as northeast Diyala and southern Kirkuk. There were 5 incidents the third week with only 1 being offensive. For the fourth week there were 2 offensive incidents out of 19 total. From August 29-31 there were 4 incidents and all were defensive. In one month the group was only able to carry out 3 offensive attacks in total showing how limited it currently is. All the attacks were in rural and mountainous areas of Iraq showing it has lost its networks into urban areas of the country. It is only really capable of increasing attacks in the areas where it operates which are mostly remote and have few people and government presence.

Al Hurrah, "An explosive device explodes in a Turkish shopping center in Baghdad," 8/5/22

NINA, "A Convoy Of Logistical Support For The Int'l Coalition Forces Targeted With An IED, South Of Sala al-Din," 8/23/22