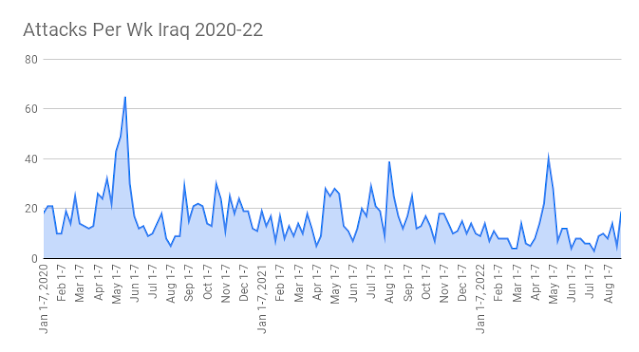 Violence spiked during the fourth week of August in Iraq. That was largely due to a large number of attacks by the Islamic State across seven provinces.

There were a total of 23 security incidents in Iraq reported in the Media. That was the most since the first week of May. 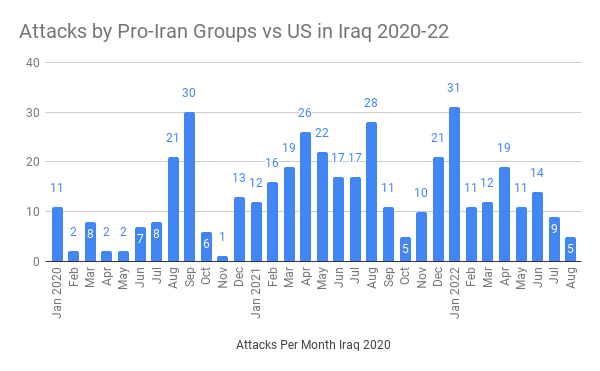 3 Incidents were by groups linked with Iran. Rockets were fired at a Turkish military base in northern Ninewa which is targeted every month now. An IED went off on an Australian diplomatic convoy that was entering the Green Zone. Australia has reportedly been trying to mediate between the Shiite parties to overcome the deadlock over forming a new government. Finally, rockets were discovered in Sulaymaniya aimed at the Khor Mor oil field. The last two were acts of political violence. Sulaymaniya is run by the Patriotic Union of Kurdistan which is currently aligned with the Coordination Framework which many pro-Iran groups are part of. It’s a reminder to stay that way or else.

That left 19 incidents by the Islamic State. That was the most incidents since 28 during the first week of May. The group may be trying to launch a belated summer offensive but that can only be determined if there are more incidents in the next few weeks. Only 12 of the 32 weeks this year have seen double digit incidents by the insurgency.

They led to 14 deaths and 15 wounded. 1 Asayesh, 1 Hashd al-Shaabi, 5 members of the Iraqi Security Forces (ISF) and 7 civilians were killed while 4 civilians, 4 Hashd and 7 ISF were injured. Kirkuk had the most casualties of any province with 10. The others were all in single digits.

There were a few changes found in the uptick in incidents by IS compared to previous weeks. First there were incidents in Anbar and Baghdad both of which had seen no militant activity for the previous weeks of August. In Anbar there was a shooting, while in Baghdad there were two gunfire incidents and an IED two of which were aimed at patrols. Two of the attacks were in the south and one in the north in areas where IS has long been active in. The south however has been dormant for almost the entire year.

The two incidents in south Baghdad along with an IED on the Hashd in Babil’s Jurf al-Sakhr district were the only offensive operations by the insurgency during the week. That showed despite the increased activity most of the attacks were still the usual defensive ones meant to keep people and the government out of the areas where IS operates in such as central and northeast Diyala.

NINA, "A Convoy Of Logistical Support For The Int'l Coalition Forces Targeted With An IED, South OF Sala al-Din," 8/23/22

- "The PMF Thwart An Attempt to Encroaching Power Transmission Lines in Anbar," 8/24/22

- "One person was killed and another one wounded in an armed attack south of Baghdad," 8/24/22

- "The Popular Mobilization responds to a terrorist attack, northeast of Diyala," 8/22/22

- "A security source reveals the details of the killing of a woman and her son in Khanaqin, in Diyala," 8/26/22

- "Two children were killed by an explosive device left behind by ISIS, west of Mosul," 8/22/22

- "Two members of the Popular Mobilization Forces were wounded north of Babylon," 8/21/22

- "One of the crowd's victims was killed and three were wounded, including an employee, in two attacks in Baghdad," 8/28/22

- "A victim and two injured in an explosion targeting an Iraqi army patrol in Diyala," 8/26/22