Review Tell Me How This Ends, General David Petraeus And the Search For A Way Out Of Iraq

Robinson, Linda, Tell Me How This Ends, General David Petraeus And the Search For A Way Out Of Iraq, New York: Public Affairs, 2008 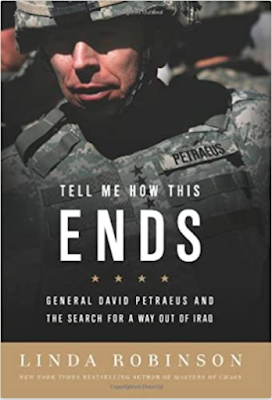 Tell Me How This Ends, General David Petraeus And The Search For A Way Out Of Iraq by Linda Robinson is about the 2007 U.S. Surge when General David Petraeus and Ambassador Ryan Croker attempted to use new techniques to break the cycle of violence in Iraq and bring about national reconciliation. Half of the book follows a great man in history narrative as Robinson focuses upon Petraeus as the right man at the right time to bring about change. The other part covers the politics of the war both in Washington and Baghdad. The author notes the dramatic reduction in violence the Surge brought about but then couldn’t tell whether that would lead to the necessary political transformations in Iraq because her work was published before the Surge ended.

The start of Robinson’s book about how the Surge came about is very conventional and has been covered by others. She begins with all the mistakes the U.S. made at the start of the occupation of Iraq like disbanding the military and then banning the Baath Party. The U.S. then focused upon withdrawing while a civil war broke out. Robinson correctly notes the cause of these policy failures was the lack of an overall strategy as the White House was disconnected from events on the ground. That was the reason why it took three years for the Americans to figure out things were going wrong and then six months to come up with the Surge. This is rather familiar territory for many books written in the U.S. about Iraq. The author misses the opportunity to blame Bush for this mess. For all his talk of victory he had little knowledge of the war he started. Even worse when he finally realized it was not working he let his staff meander through a long six month policy process to come up with an alternative. There was just no urgency. Here Robinson mostly decided to recite the events rather than analyzing them because her focus was elsewhere on General Petraeus and the implementation of the Surge.

Tell Me How This Ends does a better job in the second part but still tends to get bogged down in the details sometimes. Robinson correctly noted that the goal of the Surge was to bring down violence so that the Iraqis could move towards reconciliation and political compromise. That chance opened up when former insurgents began working with the U.S. against Al Qaeda in Iraq which became known as the sahwa. They helped turn around security and wanted to be integrated into the government. The problem was Prime Minister Nouri al-Maliki did not trust the sahwa believing they wanted to overthrow him. Robinson went through all the back and forth between the Americans and Baghdad to try to overcome this mistrust, which was never achieved. The problem with the book is that it covers tons of other material that was happening at the time like Petraeus and Crocker having to testify to Congress or how the U.S. military leadership didn’t believe in the Surge or the hardships of some of the Americans units that were deployed to Iraq during this period. It’s therefore easy to lose track of the bigger picture. Thankfully Robinson brings up the need for reconciliation in her conclusion as the true test of whether the Surge worked. She wasn’t able to see whether that happened because her work came out before the Surge was over. It turned out PM Maliki never overcame his distrust of the sahwa and the political changes the U.S. hoped for didn’t come about which contributed to the war with what Al Qaeda in Iraq became the Islamic State in 2014.

Overall, Tell Me How This Ends is a good introduction to the Surge period in the Iraq War. It has its faults like emphasizing the day to day events which can drown out the larger picture and using the great man in history theme with General Petraeus. On the other hand it does go over out what went right and wrong and pinpoints the politics of the Surge as the real focus over the combat. The reason why this is an opening book is because it doesn’t provide any conclusion to the Surge and whether it worked or not. One would have to go elsewhere to find that out.