Review The Insurgents, David Petraeus And The Plot To Change The American Way Of War

Kaplan, Fred, The Insurgents, David Petraeus And The Plot To Change The American Way Of War, New York: Simon & Schuster, 2013 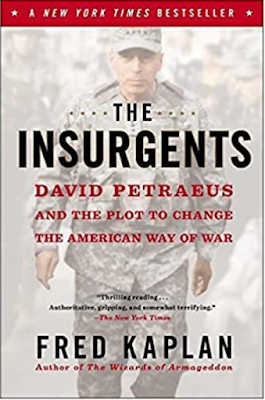 Journalist Fred Kaplan had a good idea behind writing The Insurgents, David Petraeus And The Plot To Change The American Way. He wanted to explain how a small group of U.S. army officers, academics and think tankers tried to incorporate counterinsurgency into military doctrine to save the failing wars in Iraq and Afghanistan. He goes into the ideas they shared, the books they read, the papers they wrote and their role in the two conflicts. Most of the book is about Iraq with only the last few chapters switching to Afghanistan under the Obama administration. Kaplan believed that counterinsurgency was institutionalized within the U.S. army, but the book has one gaping hole, an assessment of whether the new strategy worked or not.

Kaplan focused upon several individuals but the re-occurring characters were John Nagl, David Kilcullen and General David Petraeus. After Vietnam the U.S. military tried to put counterinsurgency behind it and returned to planning for war versus the Soviet Union. That meant when the U.S. invaded Iraq and was faced with a new insurgency it had no strategy or tactics to deal with. Nagl, Kilcullen and Petraeus all served in Iraq and had a background in dealing with small wars like this. They and others held meetings, conferences, wrote papers, and lobbied their superiors at the Pentagon to include counterinsurgency in American doctrine. Kaplan presents this a story of the determined few against the status quo. It’s also apparent that Nagl, Kilcullen and Petraeus were the main sources for his book because they dominate the narrative.

Most of the military was diametrically opposed to counterinsurgency because they were trained in fighting the Cold War. They also looked down at wars like Iraq and Afghanistan and the ideas behind counterinsurgency. Instead of focusing upon firepower and killing the enemy counterinsurgency talked about protecting the population, winning legitimacy for the host government, spending money to restore services, and more. It emphasized that these types of wars were political battles more than military ones. Kaplan shows how taking a conventional military approach helped screw up Iraq. Doing raids, kicking down doors, arresting all males, etc. were not only ineffective against the Iraqi insurgency but turned much of the population against the U.S. and made the situation worse.

Through constant lobbying this group was able to start counterinsurgency campaigns in Iraq in 2007 and Afghanistan in 2009. Petraeus would end up leading both efforts. This is where The Insurgents falls apart. It goes into the planning, the implementation and some of the effects of these two efforts but it never says whether they worked. Kaplan points out that the goal of both wars became pushing the two governments to carry out reforms to undermine the militants and gain the public’s support. The Iraqi government was a participant in the civil war. The Afghan government was thoroughly corrupt. Neither was open to many changes. That’s where the author leaves it. Perhaps he was reluctant to go further because both wars were on going when his book was published but he implies that neither campaign worked but he’s just unwilling to go there. He seemed more concerned with the group of thinkers and their impact upon the U.S. military than their impact on Iraq and Afghanistan. This is a major shortcoming because to argue for counterinsurgency and not give it an assessment only tells part of the story.

The Insurgents is about a war of ideas within the U.S. military more than whether those concepts were effective out in the field. Kaplan got caught up on his group of strategists and their fight for acceptance. He believed they won their bureaucratic battle and got counterinsurgency codified within doctrine and the officers that carried it out were promoted through the ranks. In fact, the American military has tried to put Iraq behind it just like it did with Vietnam and gone back to thinking about confrontations with major powers once again. Kaplan also implies that the U.S. had very difficult times winning legitimacy for the Iraqi and Afghan governments but didn’t come out and say that the attempt to push reforms Washington wanted largely failed. That’s the reason why the war with the Islamic State broke out in Iraq in 2014 and the Afghan government fell to the Taliban in 2020. That doesn’t make The Insurgents a bad book but it’s mostly good for reading about the debate within the U.S. military rather than implementing counterinsurgency.