Review No End In Sight, Iraq’s Descent Into Chaos 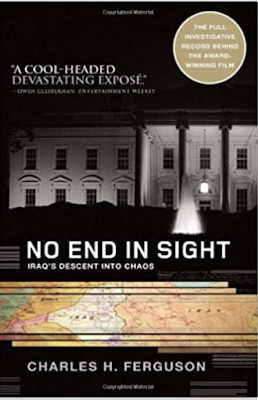 No End In Sight, Iraq’s Descent Into Chaos is an expansion of a documentary about the Iraq war that Charles Ferguson made. It consists of over a dozen interviews the author did with former U.S. officials, journalists, Iraqis and more. It is a condemnation of the U.S. invasion and occupation of Iraq. He blames President Bush, Secretary of Defense Donald Rumsfeld, Coalition Provisional Authority head Paul Bremer for everything that went wrong. Most of the book is very informative and convincing but the last third gets a bit meandering as it loses focuses and goes into all kinds of topics such as withdrawing from Iraq, Iran’s role, what might have happened in Iraq and more.

The majority of Ferguson’s work is on the flawed planning for the Iraq invasion and all the problems that resulted from it. This is all familiar territory to anyone that’s studied Iraq. Rumsfeld wanted the smallest invasion force possible which the commanding General Franks largely went along with. That’s the only thing the Defense Secretary and the general cared about and completely neglected post-war planning. Secretary of State Colin Powell’s chief of staff Lawrence Wilkerson blamed both the civilians and military in the Bush administration for this problem because they were as disinterested in running Iraq as the leadership. That was the reason why the first group in charge of Iraq the Office for Reconstruction and Humanitarian Assistance (ORHA) was understaffed, underfunded and created only weeks before the invasion. This was neglect on purpose because no one in Washington D.C. cared. The author thought this was Bush’s fault because he didn’t provide any leadership. He was interested in the invasion, but nothing else. His cabinet was full of rivalries and divisions and he did nothing to resolve them.

Most of No End In Sight focuses upon the Coalition Provisional Authority and its head Paul Bremer who Ferguson places most of the blame for the problems in Iraq. Ferguson for example had an interesting series of interviews with the CPA’s security adviser Walter Slocombe over the CPA’s order disbanding the Iraqi military. Slocombe claimed that everyone agreed with the CPA’s plan including the head of the ORHA Jay Garner. Ferguson interviewed Garner who not only denied that but recounted how he objected to it to Bremer. This is the best part of the book because the people Ferguson talked with were involved in decision making and gave an insiders’ view of what happened. The back and forth between people like Slocombe and others also showed how some Americans refused to acknowledge that their actions were wrong.

The problems with the book arise towards the end when Ferguson tries to give an overview of the Iraq War in 2007-08. A lot of it was speculative questions to people such as how the U.S. could have dealt with Iran, what might happen with all of the Iraqi refugees, and if the Bush administration could have done better. It’s dated and a lot of the people’s opinions proved wrong. Some for instance, believed that things would have been different if the U.S. had more troops, but they wouldn’t have acted any different such as not trying to stop the looting which broke out during the invasion. It’s only the few Iraqi journalists that are interviewed that note Iraqis would’ve opposed any U.S. occupation.

The author put in a huge amount of work to secure all the interviews he conducted and should be commended for getting so many people to talk to him. It was also important that he included some Iraqis in the mix instead of just focusing upon American views. This provided a variety of different opinions which was very important and provided a lot of insight especially when discussing the ORHA and CPA. That helps overlook the end of the book which isn’t half as good.