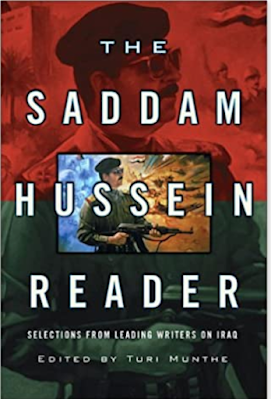 The Saddam Hussein Reader, Selections From Leading Writers On Iraq was put together by Turi Munthe, an editor at I.B. Tauris Publishers to provide some background to the coming U.S. invasion of Iraq in 2003. It has 38 selections from people both for and against Saddam Hussein. Any anthology will be up and down because of the variety of authors. This collection however is noted for how many bad pieces it included.

There are a couple good articles in The Saddam Hussein Reader but they are few and far between. Some of the better ones are by Ofra Bengio from his book Saddam’s Word that went over how Saddam created a cult of personality by portraying himself as the father of Iraq and comparing himself to historical figures such as Saladin from the Crusades. Another is by History Professor Charles Tripp on the patronage system Saddam created to rule the country. Many talked about Iraq as a republic of fear but Tripp points out that Saddam’s system of control included carrots as well as sticks. There’s a Human Rights Watch report on the 1980s Anfal campaign that destroyed the Kurdish opposition in Iraq with the use of weapons of mass destruction. Others are by Efraim Karsh and Lawrence Freedman and by Amatzia Baram on the origins of the Gulf War, and finally Patrick and Andrew Cockburn wrote about the United Nations weapons inspections in Iraq and how the U.S. attempted to manipulate them. These all provide interesting histories of Iraq from the way Saddam controlled his country to the wars he fought and his confrontations with the U.N. and U.S. These authors are also well known for their work on Iraq and the Middle East. I wish that was true for the other chapters.

The rest of the book is a hodgepodge collection of mostly really bad writing. Said Aburish for instance claimed that Saddam took power in 1979 as part of a conspiracy with the CIA to go to war with Iran. Avi Shlaim talked about U.S. foreign policy in the Persian Gulf that wasn’t even about Iraq. In “The Cost of Conflict” John Pilger wrote that 40-48% of the people in Basra city would get cancer in the 1990s and blamed depleted uranium used by the U.S. and U.K. in the Gulf War. He then went on to say that Iraq had no way to deal with this health crisis because of U.N. sanctions. The cancer rate was not near that mark, there’s never been a causal connection made between cancer and depleted uranium in Iraq, and the whole piece was shaped by Iraq’s propaganda campaign to end the United Nations embargo. The same was true for Ramsey Clark who charged the U.S. with war crimes due to sanctions. His piece was full of false claims. Similarly, David Rose had an article from Vanity Fair which interviewed an Iraqi who claimed to be the highest ranking member of the Iraqi internal security forces to defect to the West. He claimed Iraq trained foreign terrorists on hijacking airplanes implying Baghdad was involved in 9/11. The man was a fraud. Edward Said had a rambling article about how the Arab perspective on the Gulf War was missing from Western reporting and then about how he missed Arab nationalism. Speaking of rambling that’s all you can say about Noam Chomsky. He writes about Iraq for one or two paragraphs and then goes off on a tangent, goes back to Iraq, then off onto more unrelated issues. Nothing is to be gained from reading these selections. Not only that they consist of the vast majority of the book. You have to wade through all this mess to get to anything good. It’s simply not worth the time or effort and makes The Saddam Hussein Reader a maddening experience to get through.