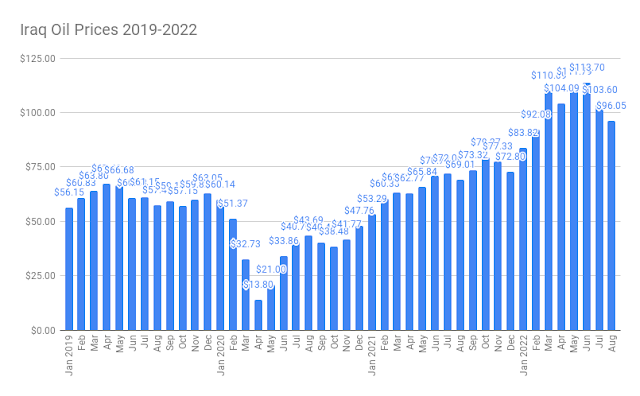 When Russia invaded Ukraine setting off a spike in world petroleum prices Iraq was riding high. As the most oil dependent country in the world Iraq welcomed the boom because it had been suffering an economic crisis since 2020 when COVID and a dispute between Russia and Saudi Arabia led to a plummet in the market. Baghdad’s hopes for a better future look to be short lived as prices are declining ever so slightly month to month.

In August a barrel of Iraqi crude sold for an average of $96.05 per barrel. Prices reached a high of $113.70 in June but have gone down since then. Earlier in the year Iraq’s Oil Minister said that prices would remain over $100 a barrel per month for the rest of the year but that only lasted for five months.

The result of the dual decline in prices and exports meant Iraq’s revenue went down as well. In July it made $10.6 billion, but $9.784 billion in August. In January and February Iraq made over $8 billion a month. Then the Ukraine war led to $10 billion in profits in March, April and July and $11 billion in May and June.

Even though overall income remains high Iraq is not benefiting from it. There is no new Iraqi government as the ruling parties are stuck in a never-ending deadlock. That means there is no new budget and Baghdad is unable to spend all this new money that’s coming in.