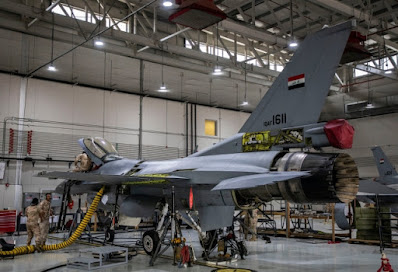 (Iraqi Air Force)
Balad Air Base in Salahaddin which is where Iraq’s F-16 fighters are housed has repeatedly been hit by rockets launched by pro-Iran groups. The base was struck in August 2020, February, March, April and May 2021. That has led Lockheed Martin’s contractors who service the planes to withdraw their staff once again. Some of the crews were pulled out in March, and now the company announced that all of its personnel have left Balad. This happened before in January 2020 for the same reasons. This will greatly curtail the use of the F-16s which are barely operating as of now.

The Iraqis are not capable of maintaining the sophisticated F-16 jets on their own. They rely upon the Lockheed workers for that. When U.S. support for the planes ended in January there were no combat missions by the planes from April to September. When the contractors returned Iraqi pilots had to spend most of their time on training missions to regain their competency. Thus during the last quarter of 2020 the F-16s flew 271 sorties but only four of those were combat ones. Likewise, in the first quarter of 2021 there were 299 sorties but 295 of those were for training. The latest withdrawal of American workers will lead to the partial grounded of the jets again and when they return the pilots will have to focus upon training all over again.

This comes at a bad time because many of the Iraqi forces’ air assets are currently out of service. The country’s Su-25s did not fly at all during the start of 2021. The Czech L-159s returned to service after their contractors came back to work last year but they are not operational because the pilots need to re-qualify which isn’t scheduled until the second quarter of the year. Baghdad also bought 20 drones from China but they have been out of service since September 2019 because of a lack of spare parts. Logistics and maintenance has always been a weak point for Iraq. During the U.S. occupation the Iraqis never showed much interest in the matters relying upon the Americans instead. That mindset still largely exists today.

The F-16s are the pride of the Iraqi Air Force but have been plagued by problems from delays in their delivery to a huge amount of time spent teaching Iraqi pilots how to use them. They’re also not necessary for the types of operations the Iraqis are most in need of which is fighting the insurgency. It’s also ironic that Iraqi Hashd factions are carrying out these attacks and hampering their own country’s defenses. Their sponsors Iran however have always wanted a weak and divided Iraq, which is what Tehran is currently achieving.