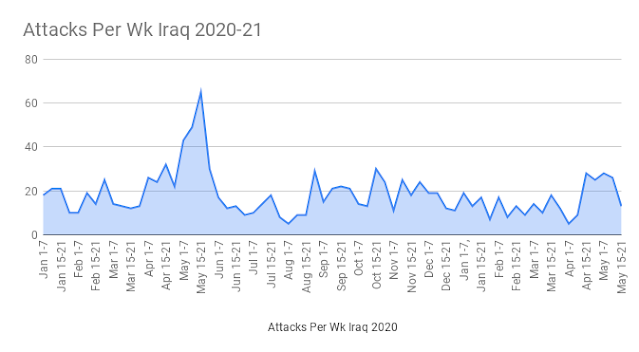 Attacks by both the Islamic State and pro-Iran groups dropped during the third week of May. It’s too early to tell whether this was a temporary dip or whether the campaigns by the two groups are continuing. If this does mark the end of the IS Ramadan offensive it would be the latest example of how far the insurgency has fallen.

There were 15 security incidents reported from May 15-21. That was down from 30 the week before and 36 the first week of May. Incidents were high during the month because the Islamic State began its annual Ramadan offensive at the end of April. Groups aligned with Tehran also started their own campaign in December. Violence often goes up and down in Iraq so only the following weeks will tell whether these groups are winding down their operations or whether this was just a temporary decline. 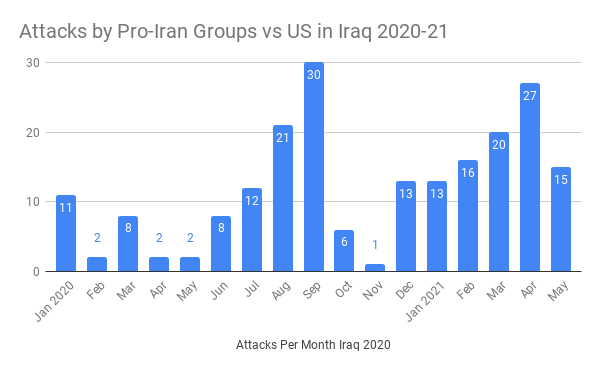 Pro-Iran groups only carried out two attacks during the week. Two convoys carrying supplies for the U.S. were bombed in Dhi Qar and Diwaniya. The majority of attacks by these groups are aimed at these soft targets. Reuters reported that the Iranian Revolutionary Guards Quds Force is creating new small units from Hashd fighters which will be directly under their command. They have been sending them to Lebanon for training with Hezbollah. This is exactly what Iran did before during the U.S. occupation with the Mahdi Army, Special Groups, Asaib Ahl Al-Haq and led to the creation of Kataib Hezbollah. The last two and others have already been creating a plethora of new organizations that lay claim to these attacks so they can deny responsibility. It’s unclear whether Tehran is creating its own groups or just trying to support the ones that already exist to try to regain its influence upon these factions which have gone off in their own directions since Quds Force commander General Qasim Soleimani was killed in January 2020.

They caused just 3 deaths and 3 wounded, likely the lowest casualty count since 2003. 1 Hashd al-Shaabi and 2 civilians were killed and another 1 civilian and 2 soldiers were injured.

There were no attacks in Anbar, Babil and Baghdad and only 2 in Ninewa. These are all side fronts for IS. Anbar and Ninewa are important for logistics, but none of them see much violence.

Diyala remains the center of IS activity in Iraq. There were six incidents. That included two power towers being destroyed, a checkpoint attacked, a kidnapping, and an army post being hit by mortars. This week incidents were spread around. There was one in Khanaqin and two in Muqdadiya two strongholds of the insurgency, but also ones in Baquba, the north and south.

Kirkuk and Salahaddin are secondary fronts. In the former crops were burned, there was a gun battle and a shooting, and in the latter a sheikh was assassinated and another shoot out. Both provinces have well known IS bases in southern Kirkuk and the Hamrin Mountains of Salahaddin but attacks wildly fluctuate in both. The militants appear to be more interested in rebuilding their cadres than taking on the government in these areas.

Bas News, "Firefighters Save Crops from IS Deliberate Fire in a Kirkuk Village," 5/17/21

NINA, "A civilian kidnapped near Al-Wajih district in Diyala," 5/20/21

- "An element of Al-Sahwa was killed in an ISIS attack on a station in Diyala Governorate," 5/19/21

Shafaaq News, "5 people were killed and wounded in an accident in Mosul and foiled a bombing in Diyala," 5/21/21

- "A civilian was killed in an armed attack, and a girl committed suicide in Baghdad and Kirkuk," 5/18/21

- "The fall of an Iraqi tribal leader in a confrontation with ISIS and two of the attackers were killed and wounded (update)," 5/21/21

- "A high-ranking army officer and his escort were wounded by an explosion targeting a military vehicle near Mosul (photos)," 5/19/21