The Islamic State’s annual Ramadan offensive in Iraq continued into the first week of May. Pro-Iran groups were active as well. That led to the most incidents since May 2020.

There were a total of 36 security incidents reported in Iraq from May 1-7, 2021. That was the highest weekly total in a year’s time. 8 were by pro-Iran groups and 28 by the Islamic State. The latter matched the number of incidents during the 3rd week of April when IS started its new campaign. Groups aligned with Tehran have also been increasing their attacks since December.

A total of 33 people were killed made up of 2 civilians, 3 Hashd al-Shaabi, 8 Peshmerga and 20 members of the Iraqi Security Forces (ISF). Another 37 people were injured including 1 foreign contractor, 1 civilian, 2 Hashd and 23 ISF. Kirkuk had the most casualties with 35. 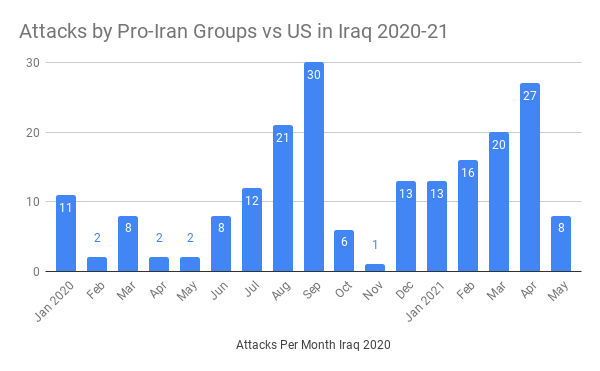 The 8 incidents by pro-Iran groups occurred in Anbar (2), Babil (1), Baghdad (1), Basra (1), Muthanna (1), and Salahaddin (2). That consisted of IEDs on convoys working for the U.S. in Anbar, Babil, Basra, Muthanna, and Salahaddin, plus rocket attacks on Ain Al-Asad base in Anbar, Baghdad International Airport, and Balad Air Base in Salahaddin. That last attack wounded a foreign contractor.

Anbar, Babil, Baghdad and Ninewa remained secondary areas of Iraq for the insurgency. There was a rare shoot out in Arar, Anbar that left two soldiers dead and three wounded. There was an IED in Babil’s Jurf al-Sakhr district in the northeast that killed a soldier and injured another. There was a major confrontation with the security forces in Tarmiya in northern Baghdad which is a long time IS center. That left 10 soldiers and 1 Hashd dead. There was one more shooting in the province that killed a civilian. Finally, in Ninewa there were three IEDs and one gun battle. Anbar and Ninewa are used to move people and material back and forth with Syria and therefore are not major targets. IS hits Babil only about once a week looking for the security forces. Baghdad has occasional incidents in the outlying towns like Tarmiya where there’s still an IS presence. The group has largely given up infiltrating into Baghdad city itself.

There was an explosion of incidents at the start of May which then tapered off in Diyala. May 1 there were 6 incidents including four attacks on checkpoints, a kidnapping, an IED, and a power tower destroyed. Two more checkpoints were hit later in the month. four of the nine incidents were in the Muqdadiya district in the middle of the governorate. This is one of the major bases for the insurgency in Iraq.

Kirkuk was almost dormant from November to April. It has since exploded during the latest offensive. Like Diyala, IS hit big on May 1 with four confrontations with the security forces. One led to the deaths of 8 Peshmerga and 10 more wounded. The Bai Hassan oil field was bombed once again. The same thing happened in April. A field was also burned which occurred last year as the militants went after farmers.

There was only one attack in Salahaddin when an army patrol was hit by an IED. That resulted in four soldiers being injured.

Al Aalem, “Al Aalem investigates the causes of ISIS attacks in Kirkuk and the nature of the deployment of security forces,” 5/5/21

Iraq Newspaper, "In pictures, ISIS terrorist operatives launch an attack on the Peshmerga and 15 dead and wounded among them and captives and in Tuz Khurmatu, killing 9, including a company from the 59th Brigade and in Naft Khana," 5/1/21

- "An explosive device exploded on a civilian vehicle southeast of Mosul," 5/2/21

- "A soldier was killed, and another one was wounded by an explosive device north of Babylon," 5/7/21

- "A soldier was killed and two others were wounded by an explosive device in northwest of Mosul," 5/6/21

- "A Sweep Operation In Search of Two Farmers kidnapped By ISIS In Diyala," 5/1/21

- "Two convoys of logistical support for the US forces targeted in Salah al-Din and Anbar," 5/6/21

- "Two security personnel were wounded in an ISIS attack northwest of Baqubah," 5/2/21

- "Casualties Reported In ISIS Attack On Peshmerga In Disputed Areas," 5/1/21

- "Targeting the vicinity of Baghdad airport with Katyusha rockets," 5/2/21