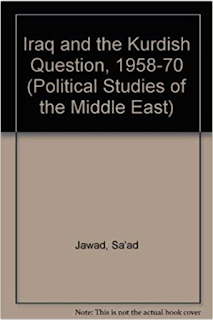 Iraq & the Kurdish Question, 1958-1970 by Sa’ad Jawad is a very good breakdown of the politics surrounding the Kurdish movement. It has several major themes. The first is the divisions within the Iraqi Kurds between the tribal leaders and the intellectuals. The latter in the form of the Kurdistan Democratic Party (KDP) tried but failed to provide leadership. The former were able to maintain their power and their feudal systems as a result. The second was how successive Iraqi governments never came to a compromise with the Kurds over their demands for autonomy. The third was how foreign powers, especially Iran was able to dominate the movement militarily and economically.

The drive for Kurdish nationalism in Iraq was always dominated by tribal leaders. The most famous was Mullah Mustafa Barzani who led the movement from the 1930s to the 1970s. The sheikhs controlled both land and men that gave them the strength to stand up to the government and make demands of it. In the 1940s urban intellectuals began organizing in places like Sulaymaniya and Baghdad. Many of them had Leftist leanings and advocated for land reform and socialism such as Ibrahim Ahmad and Jalal Talabani. They would come to lead the Kurdistan Democratic Party (KDP). They hoped to wrest control from Barzani even though they named him president of the KDP. Jawad explains the back and forth between the two sides throughout almost every chapter and how Barzani was able to consistently outmaneuver Ahmad and Talabani and take total control of the KDP by 1964. That was because the intellectuals had little support and never really tried expanding their base into the countryside where the majority of people lived. The result was the sheikhs were able to maintain control of their land and the peasants. As Jawad points out in his conclusion he didn’t believe the Kurdish movement was a revolution because it was about maintaining the status quo in Kurdistan socially and economically. The calls for autonomy were mostly about the Kurds being free of the government although Barzani would eventually expand that demanding things like positions in Baghdad.

All the Iraqi regimes covered in the book were not serious about giving concessions to the Kurds. All would follow the same pattern, make promises, go back on their word and then often turn to military means which would fail. In 1925 the monarchy agreed to recognize Kurdish rights as part of a deal with the League of Nations which was never followed through with. In 1963 when the military and Baath Party overthrew the government they offered all kinds of concessions to the Kurds. The army however eventually turned on talks and launched a military offensive against the Kurds in 1965. That didn’t work and the government returned to negotiations. Despite that Jawad points out that the Kurds were always willing to make deals with every government. Each time a new regime came in power Barzani thought they would be different than the previous one and offered his support. This was a recipe for disaster. The various governments were never going to give the Kurds autonomy and yet they always held out hope. This was also due to Barzani believing he was a real power while that was not shared by most of the elite in Baghdad. The book goes into great detail about all the various talks that were held, empty promises made, etc.

Last, Iraq & The Kurdish Question has a chapter on foreign powers and the Kurdish question. It argues that none of the countries that offered the Kurds support such as the USSR, Israel or Iran were interested in Kurdish rights they simply wanted to weaken Iraq. Tehran had the greatest influence as it became the economic lifeline for Kurdistan after Baghdad imposed a blockade on the region. It also sent heavy weapons, advisers and allowed the Kurds to cross back and forth across its border. The author believes Barzani became completely dependent upon Iran as a result. That was proven in 1975 when the Shah cut off military aid and sealed the border. That led the Kurdish revolt at the time to collapse and Barzani to go into exile never to return to Iraq. This is not something usually discussed in other Kurdish histories. Yes they mention nations like Iran but they don’t talk about how it gained a modicum of control over the Kurdish struggle.

If you want to understand the history of the Kurdish movement in Iraq this would be one of the books to turn to. It’s well written and covers a lot of details from the different personalities to the Iraqi governments and their policies towards the Kurds to how the world saw the issue. The analysis of the role of Iran is very original as well.