Both the Islamic State and pro-Iran groups continued their offensives into the second week of May. During the winter attacks by the insurgency were often down to single digits each week. Then at the end of April the annual Ramadan offensive began. On the other hand, starting in December Hashd groups loyal to Iran began a new series of assaults upon American targets in Iraq.

There were a total of 31 security incidents recorded in Iraq from May 8-14. There were 36 the week before. 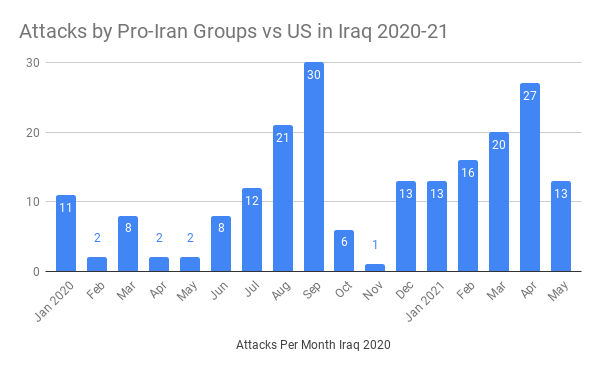 5 of those incidents were by factions loyal to Tehran. That included IEDs on convoys carrying supplies for the U.S. in Anbar (2), Dhi Qar and Diwaniya. A drone also hit the Ain al-Asad base in Anbar. This was the second time Asad had been attacked this month. These groups have been increasing their operations nearly every month. Originally this was driven by rivalries between different factions. Now it appears they have a wide range of goals that include things like hindering foreign contractors working with the Iraqi forces that will cripple the Air Force.

They left 14 dead and 25 wounded. 1 Peshmerga, 2 members of the Iraqi Security Forces (ISF), 4 civilians, and 7 Hashd al-Shaabi lost their lives and 1 Peshmerga, 5 civilians, 7 Hashd and 12 ISF were injured. Salahaddin had the most casualties during the week with 17.

Anbar, Babil, Baghdad and Ninewa continued to see low level insurgent activity. There was a kidnapping in Rutba likely to get people to pay ransom, and an IED was discovered and dismantled in Akashat in Anbar. An infiltration attempt was stopped in the Jurf al-Sakhr district of northeast Babil. In Baghdad, crops were burned in Meshahda and a grenade was thrown in Tarmiya both in the outer regions of the province. That’s where almost all IS attack occur these days. There was an IED in south Ninewa in the Qayara district. All of these areas only see single digit incidents each week. Anbar and Ninewa are used to ferry men and material from Syria to Iraq. Baghdad and Babil are secondary fronts these days.

Diyala is the center of IS activity in Iraq. There were 9 incidents there including two attacks on villages, two assaults on checkpoints and three gun battles. During one of those incidents the militants also destroyed an agricultural pump and electrical transformers in the Azim district in the north. 5 of the 9 incidents were in the Khanaqin district in the northeast which is the main strongpoint of the insurgency. IS continues with its campaign to intimidate locals while challenging the security forces.

Kirkuk was very quiet during the winter but incidents have returned with the new Ramadan campaign. Out of the four incidents the biggest was two electricity towers being blown up in the Riyad district in the south. The Islamic State was never expelled from the south during the war and has maintained camps there ever since. Almost all violence is concentrated there with occasional attacks in Kirkuk city.

Salahaddin followed the same pattern as Kirkuk. During the second week of May there were 2 attacks on checkpoints and three gun battles. Incidents in the governorate are spread across areas like Tuz Kharmato in the east to Samarra and Dour in the center. All of the attacks were against the security forces. This has been the main target for months now as IS announced a war of attrition against the government.

- "Two Civilians Injured in Separate IS Attacks near Khanaqin," 5/11/21

Buratha News, "Clashes between the 47th Brigade of the Popular Mobilization Forces and ISIS terrorist elements trying to infiltrate and cross to Jurf al-Nasr," 5/8/21

- "The forces of the 315th Brigade in the Samarra Operations Command of the Popular Mobilization Forces put an end to the attack by ISIS terrorists," 5/8/21

Iraq Newspaper, "The assassination of an activist by militia fire near the grave of Hussein, and ISIS kills three of the Mahdi Army near Hassan al-Askari," 5/8/21

- "4 Fighters Of The PMF Martyred And Wounded While Responding To An ISIS Attack, East Of Samara," 5/9/21

- "A convoy of logistical support for the international coalition forces targeted in Anbar," 5/13/21

- "An ISIS attack thwarted and the assassination of a young man by unknown gunmen in Diyala," 5/12/21

- "ISIS Targets 15 Agricultural Pump And An Electric Transformer On The Border Between Diyala And Salah al-Din," 5/11/21

- "Reports About Targeting A Convoy Of Logistical Support For The Int'l Coalition Forces In Anbar," 5/10/21

Shafaaq News, "An armed attack near a mosque in Kirkuk leaves a woman dead and a man wounded," 5/13/21

- "An explosion targets a convoy carrying equipment for the International Coalition in southern Iraq," 5/14/21

- "Unidentified persons throw a bomb at an army target north of Baghdad," 5/11/21

Sotaliraq, "Victims from the Sadr Brigades in the Samarra attack and ISIS set fire to agricultural land north of Baghdad," 5/9/21